When I started my effort to design and market a fuel injection system for flathead Fords, I suspected it was a business designed to fail, and it was successful in that regard. The concept was too radical for the market, and even with a very low profit margin, it was too expensive for the average street rodder. It was also a fact that many car enthusiasts simply wanted to run the old traditional carbs as an “old school” nostalgia thing. The advantages of fuel injection did not concern them. It seems hot weather vapor lock is a shared generational experience.

In order for the business to be successful, I would have had to do a great deal of marketing, which I knew how to do having done it successfully for my medical electronics business. In addition, I would also have had to broaden the application to more modern engines. Having retired from my strenuous medical electronics business, I did not want to go through that exhausting process again. Instead I wanted a retirement business that would be interesting and enjoyable; in that, I was successful.

During the design phase of the product, I teamed up with Dave Cimbura, who was marketing a fuel injection throttle body designed by his brother John Cimbura. It was through Dave that I met Tony Barron, the son of Frank Barron, a hot rod pioneer and a huge rival of Vic Edelbrock, who started what is now a huge aftermarket hot rod company. Tony had the manifold that he designed to support four Weber carbs, which my throttle body mimicked in dimensions, but not in function. Tony was exceptionally generous in his support; I exhibited several times in his booth at the LA Roadster show. My wife Sara and I were also a nonfunctioning part of Tony’s pit crew at Bonneville Salt Flats for his flathead powered Lakester, which set a new world record that year. 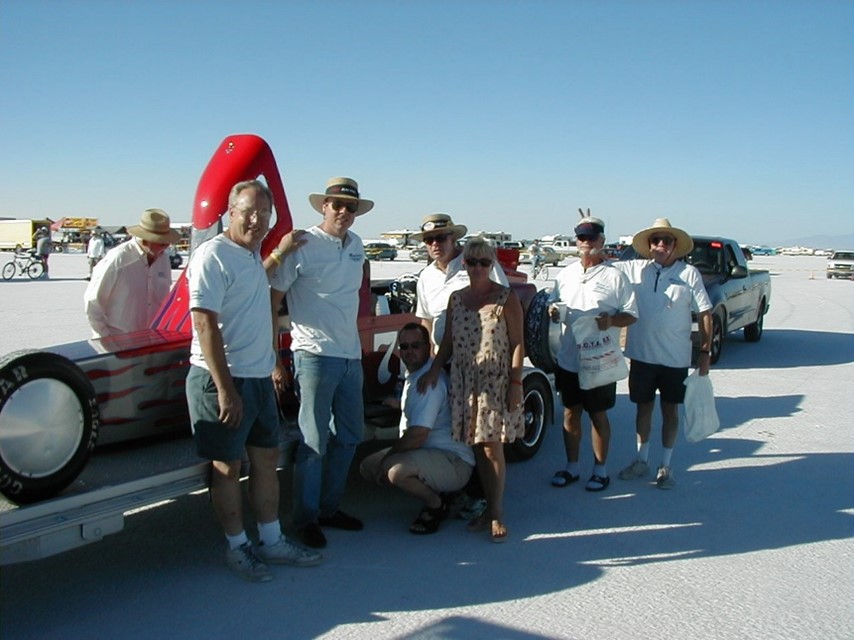 Tony introduced me to some great people, including Ed Iskenderian of cam grinding fame and Lou Sentner, another pioneer in this industry. I was able to visit the factory owned by Jerry Magnuson, an avid hotrodder, who along with Tom Roberts pioneered a new supercharger product for the flathead. I installed the first passenger car fuel injected flathead use of this product on my 1940 coupe. Tony put me in touch with the specialists who helped build his Bonneville engine to work on my engine. One of these specialists was the engine man for Carroll Shelby, who provided me an opportunity to tour Shelby’s private garage to look at his personal car collection, along with the collection of Steve McQueen. 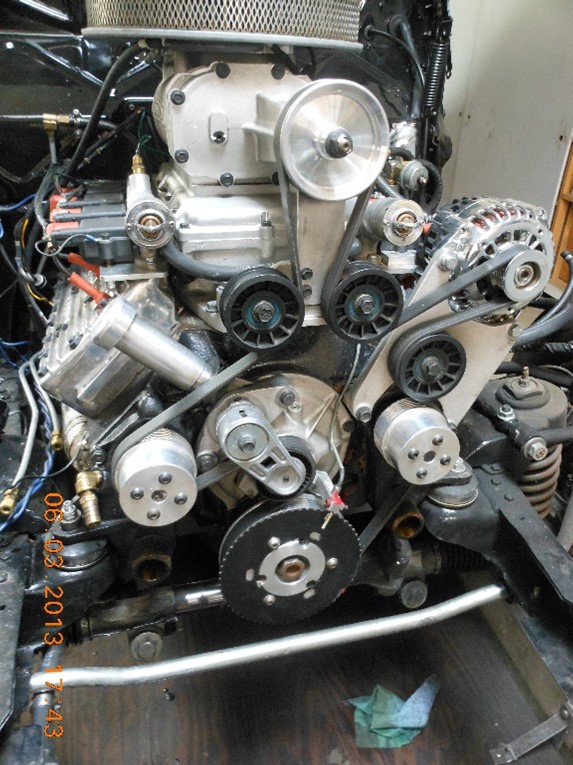 My relationship with Tony changed when I used Edelbrock cylinder heads (which I essentially got for free) on a demonstration engine built by EFV8 club members. His feelings about Edelbrock were more intense than I realized at the time. While I lost the good graces of Tony, I did gain a very valuable new friend: Russ Newnes. Tom Webb introduced to me to Russ. Tom and Russ wanted to join the small group and help build the engine. I asked Russ if he had ever worked on a flathead; he said no, but he had worked on other engines. I offered club members who had never worked on a flathead Ford engine an opportunity to build one in my shop using parts that I had acquired and did not have a need to use.

It turns out Russ (tall guy standing) had worked for Dan Gurney (squatting), who is a famous Formula One driver and car designer. He was on the pit crew at Indianapolis for Dan and Bobby Unser (driver) and assembled turbo Offenhauser engines for Indy race cars. It was such a delight to have him work on the team and give us the benefit of his expert experience. He retired from Ball Aerospace as a precision machinist and taught me how to use my milling machine and lathe. 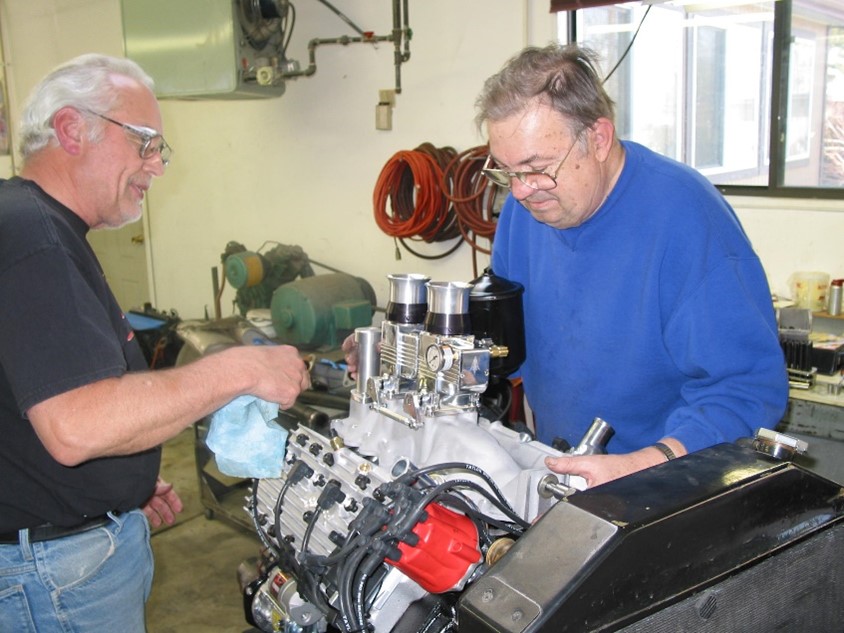 In an effort to build a market for the flathead fuel injection, Sara and I did quite a few trade shows in partnership with Dave Cimbura. We did the hot rod show in Indianapolis, the NSRA shows in both Louisville and Pueblo, plus the LA Roadster show as guests of Tony Baron. In addition, we attended several SEMA shows in Las Vegas. These shows required expense and effort, but they were also fun as I got to see a lot of new stuff and meet a lot of great people. 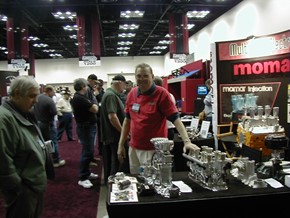 At the Indy show, I met Phill Hill, the team driver for Ferrari and our first Formula One champion. I got a tutorial on the Ferrari triple shoe brakes. Next, I met Chip Foose, the famous custom car designer. He gave me a personal tour of the Riddler winning hot rod. While Sara and I were grabbing a sandwich at SEMA, Craig Breedlove of Bonneville fame and his girlfriend asked if they could join us. Over lunch, I learned how to make wheels and tires that can go over 400mph.

The list of people I met continues with Pete Peterson, publisher; Smokey Yunick, famed race car innovator; Brock Yates, journalist and passenger with Dan Gurney on the infamous Cannonball Run where Dan stated, “At no time did they exceed 175mph.” In addition to recognized names, I got to meet many very talented people that make up the vibrant hot rod industry.

In spite of my age, I am not done yet. My current venture is writing action adventure stories and having them published. Not a really good way to make money, but it is a nice challenge and a chance to meet more talented and creative people. One of my books has led to an audio production, which, in turn, has now led to a significant Hollywood effort. More about that coming soon – stay tuned!

I hope you have had some success in life that will let you enjoy a benign failure now and then the benefit of which added some challenges to your life and let you meet new and interesting people who inspired you to keep on keeping on and guided you to success.