Charles wins his latest trophy!
At September’s annual Lincoln Continental Owners Club Western National Meet in Westminster Colorado, Charles Clark took home the trophy for “Best Primary Division” 1939 to 1942 Lincoln Continental. Notice that the 1940 Ford “Bahnburner” is sulking in the background with its back turned to its more glamorous sister. 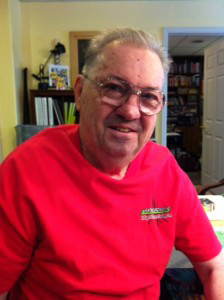 Charles Clark, popular author of the Hotrod Adventures, began his adventures with cars starting in his 9th grade science class when he was introduced to the internal combustion engine, which later led to his discovery of high performance cars.
Charlie’s action-packed stories have two kinds of followers: those who share his passion for classic, high-performance cars, and those who love a page turner.
He is a retired professional medical electronics engineer (earning a BS in Biology from Union College in Schenectdady, NY and an EE from Cornell Univesity, Ithaca, NY). Charles is an entrepreneur (founder of Sandhill Scientific) who has had a lifelong love affair with old cars starting with his 1940 Ford coupe purchased in 1954 for $500. He has spent years repairing and assembling old flatheads and designing and building new fuel injection systems for that old Ford engine.
Charles is currently the proud owner of many old cars—including the 1940 Ford Standard coupe featured in The Bootlegger ’40 Ford, a 1940 Lincoln Continental convertible and 1955 Chrysler 300. Along the way, he has owned and restored Corvettes, Mustangs, Pontiac GTOs, Cameros—he even shared ownership of a 1948 Pontiac he bought for $75, then traded it for a 1950 Olds Holiday hardtop!
As an octogenarian, he doesn’t muse about the past.
Rather, Charles puts the hammer down and roars through into the future.
Connect with him on social media and follow his blog via his website!