Roaring out of the pages of the Bootlegger 40 Ford book and into your unprotected ears comes the full audio production of the Bahnburner story. Just like the days of old when we sat by the Atwater Kent radio, or turned on the Sonic radio in the old Buick to listen to the Green Hornet, you can now listen to the exciting adventure of the Bahnburner while you are stuck in a traffic jam on the freeway or enjoying the endless monotony of I-70 across Kansas in your KW.

The 16 speakers in your new Lincoln Horizon will make real the excitement of our Hollywood cast as they narrate this daring tale, and you will be thrilled by the full sound track as I drive the 1940 Ford down the autobahn in Germany to its destruction in a death race against a wicked old Nazi. Ok – so listen on you laptop, iPad or cell phone if your heart cannot stand the full sonic stress of high velocity action.

While you are in a listening mood, do not forget to also order my other audiobooks, plus the introduction tale of the Titainium Camshaft. Whether you are a Gearhead or housewife changing diddys, there is something for everyone in the stories. Enjoy!

(Click each image below to learn more and purchase)

Imagine a small, black car. A simple car of its time. A ’40 Ford coupe. But just not any coupe; this little coupe was destined to become the famous Bahnburner, making global headlines after author Charles Clark witnessed a high-performance Mercedes create a hit-and-run on the Autobahn, wrecking a BMW and killing the occupants, an engineer who worked at BMW and his wife.

That evening, the Mercedes driver entered a bar and bragged about what he had done. Clark was there and challenged him to a race and a bet of $35,000 – a race that turned his simple Ford coupe into the awesome, don’t-mess-with-me Bahnburner. It became a my-car-can-beat-your-car revenge meet. The rest became history, with many helping hands from the engineers at BMW and driving tips from race-car driver Bobby Unser. 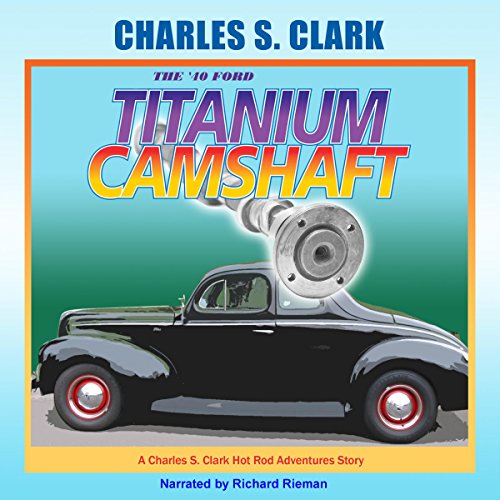 Narrated by: Richard Rieman
Are you ready to enter a master engineer’s secret workshop? Are you prepared to climb aboard and burn up the road?

Jerry Price has the mind of a genius, the focus of a laser, and the dedication of a saint – when it comes to cars. His challenge is to create a camshaft the likes of which no car maven has ever seen.

Can he create it in time? Will it prove the missing part that will win the Bootlegger ‘40 Ford its high-speed challenge? 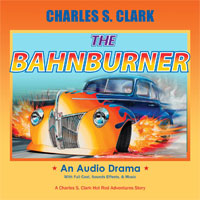 Performed by a professional cast with sound effects and music.
Charlie thought he and his wife had gone to Germany to visit their grandkids and enjoy a vacation. Instead, they witness a vicious old Nazi commit murder on the Autobahn. Though it’s not possible for the police to discover who committed the crime, Charlie encounters the perpetrator accidentally and challenges him to a racing dual on the autobahn. The stakes couldn’t be higher. Can a 50-year-old American car take on the powerful Mercedes and find justice in a deadly high-speed race? Hold onto your seat and your ear drums, and prepare for an adventure that’ll burn up your imagination in … The Bahnburner!