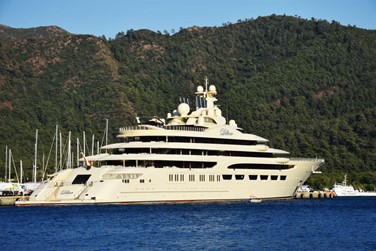 I think it would probably look a little out of place on Chatfield Reservoir.

For those of us with less humble, but more socially, acceptable ways of acquiring discretionary income, there is the opportunity for the acquisition of a collectable classic car or hot rod. Get the kids educated and remodel the kitchen for the wife; if there are some funds left over, then buy the car you wish you had in high school and spend your stash on that. This has been a done deal for me as I have been down that road numerous times. Granted, it can be a bumpy road but full of adventure and satisfaction if kept in check.

All roads have an end in a journey, and having celebrated 89 birthdays, I better be aware of that. I know what to do with the cars I have, but who else does? Better not to leave too big a problem for the family when the end of the road is reached. So the word is I will quit buying cars and start fixing up what I have. I will not be buying new toys, unless of course it is an outstanding buy on the one car I always wanted that I find for sale, and it is really cheap. I finally got the “Blue Bird” back (1962 Pontiac Catalina) with new threads, and this big toy will definitely keep me occupied getting it ready for the road.

But let’s pay some attention to the small toys. I never met a car guy that didn’t have at least a couple of model cars. Some even have huge collections of them. These toys fit in one of two categories. There are the ones we had when we were young. We ran them across the rug, smashed them into each other, or put batteries in them and proceeded to annoy the neighbors by running them down the street and across the lawns. Then there are the ones that we bought just to admire. We bought those as adults as a way to make dreams seem real. I fall into this category.

In my medical instrumentation business, I had a chance to travel to many different countries in pursuit of sales. When spare time was available, I would go shopping for the model of a car that I liked that was manufactured in that country. I could have gone online to purchase them, but there would be no memory associated with that method. When I look at each of these small model cars, I immediately flash back to the time and place that I acquired it. Stroll with me down my memory lane of toy cars.

This was a nice vacation I had with my family in northern Italy where we stayed in an old farm house in the hills above Certaldo. It included sunflowers, apple trees, olive trees and fleas in the beds. On a nice sunny day, the grandkids wanted to go to the ocean and swim, which created an opening for Sara and me to take the Audi and high tail it to Marenello and the Ferrari Museum. 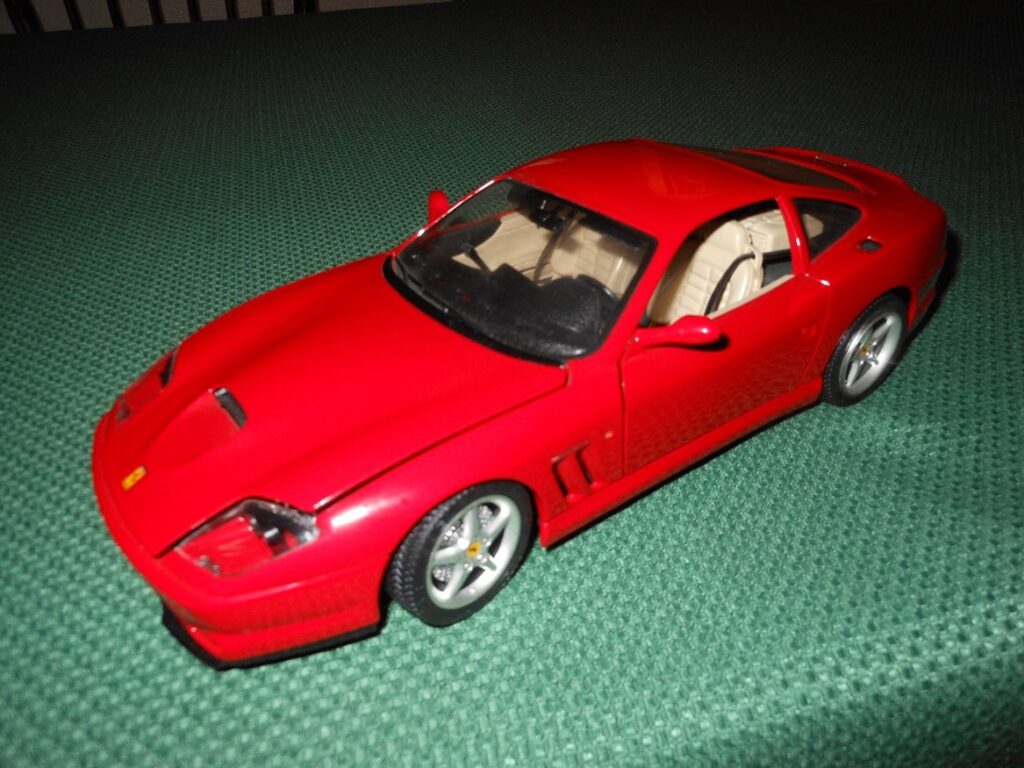 When we arrived in Marenello, we had no idea where the museum was located (we had no map). In those situations, I go to inertial navigation and just drive around until I find the destination. We eventually found a big building that looked like a factory; I drove in front of it just as a red Ferrari 456 came flying out the gate. “What the hell,” I thought, “Let’s just follow it.” Sara and I went about half a mile and came to another gate across the road. It raised up, and the Ferrari passed through. I thought it best not to try to go through that gate. The sign said: Pista di Fiorano, Enzo Ferrari’s own test track. (I was ready to give it a go around the track, but perhaps I should save that for the next visit . . . )

I back tracked and found the museum right across the street from the factory. What I saw in the museum is more than enough for another blog. There is just one tidbit I have to share: I looked at one part in a display case that appeared at first glance to be an oversized cam shaft. It was a crank shaft with maybe just a two inch or less throw, which is about 25% of what I am used to seeing. Then it hit me how the Formula I engines could turn at 20,000 RPM, three times beyond what I have experienced. That little short throw crankshaft is what makes that possible. It was the enabler making possible the ungodly banshee shriek of the race engine. 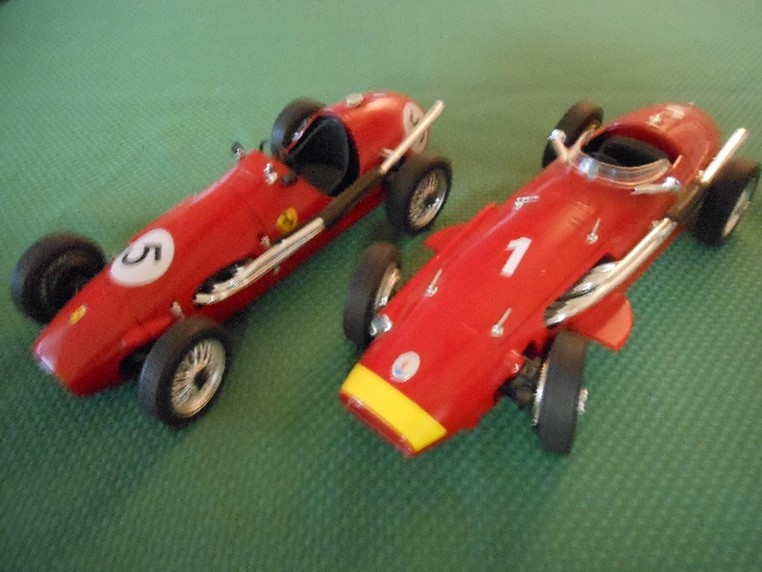 On the way out, I stopped at the museum store and bought these toy cars along with the obligatory coffee cup to hold my pen and pencils. This definitely ranks as a fond memory.

When my grandson, Marcus Maier, was born in Berlin, we went for an extended visit to the home of Jurgen and Vicky, his parents. My past time in Berlin was to get a day Ubahn ticket (subway) and randomly go to different areas of the city to see as much as possible. A really great place to visit is the KDV Department Store, which is similar to Macy’s in New York with a huge selection of “stuff” and one entire floor dedicated to a deli. I got a nice, fresh, cold beer and brats that are a level above what you can get in the U.S.

In the collectables section of KDV, I found this detailed model of the 1928 Mercedes SSK. It only takes a few million dollars to buy a real one.

Next up was to take the Ubahn to Tegal and catch the bus to Heilgensee to get back to the family. I walked out of the KDV Department Store with my new toy to stroll towards the Ubahn station, which was a couple of blocks away. Much to my surprise, the street was packed with the gay and lesbian parade. There was no way to get to the station, except to join the parade. I got in stride with the members of the LGBTQ community, many of whom had sobriety issues that day, plus a couple whose status is not covered by the alphabet soup designation. Quite a memory! 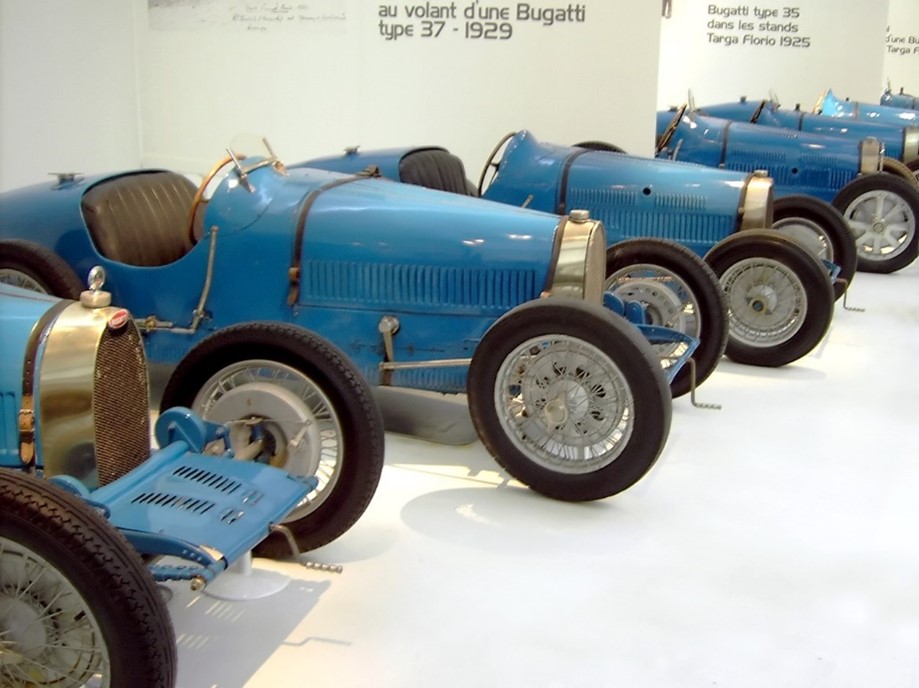 If you are the Schlumpf brothers and have a big sweat shop making a ton of profit (provided you sort of ignored your taxes), you could over indulge in collecting the rare Bugatti cars plus other classic prewar cars and build a very special museum for them in Mulhouse, France.

When the government objected to this arrangement, it was time for the Schlumpf brothers to high tail it to Basel and leave the museum behind for the government to handle. With 105 Bugatti cars to display, the government created a national museum and added even more classic cars to create the French National Auto Collection, which is the largest car museum in the world. 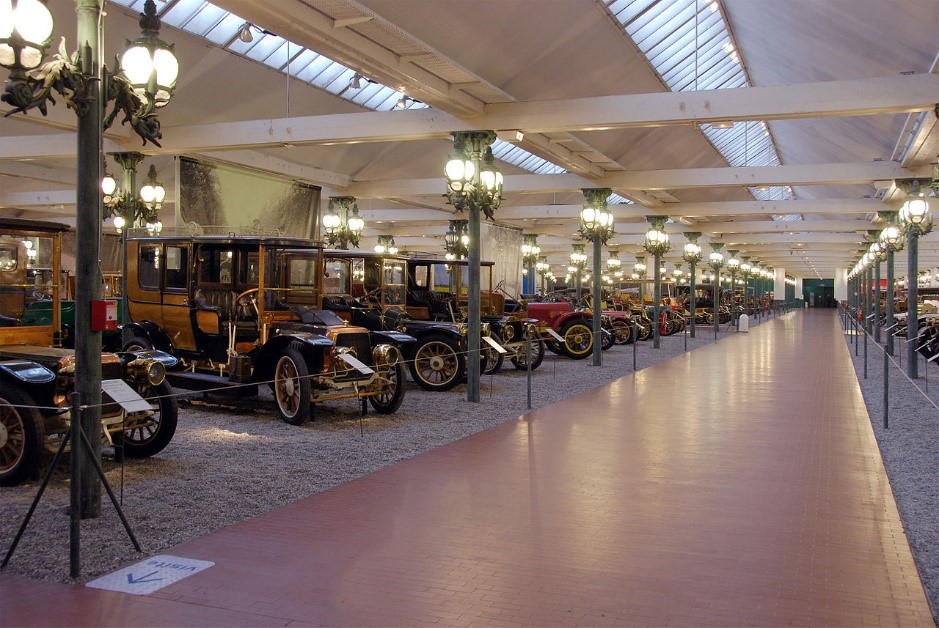 Following a visit to my French representative in Strasbourg, it was the ideal opportunity to drive up the Rhine River Valley to Mulhouse and tour the museum. This is an unbelievable spectacle of the most collectable cars in the world on display in a fabulous building built just to show them.

The visit to the gift shop required great restraint on my part in order to respect not only the foreign exchange rate, but also the luggage allowance and credit card limit, so I just bought two toy models: a famous race car, and a model of the unbelievable Bugatti Royal. 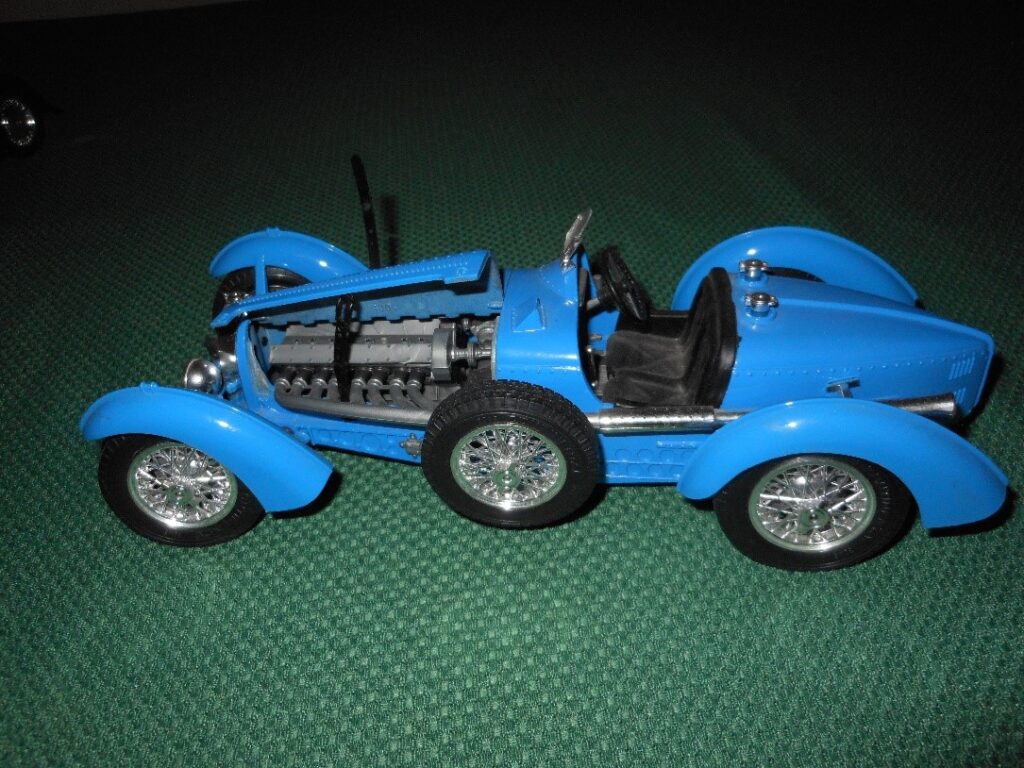 The Royal is one of six; each one was built to be unique. Ettore Bugatti was snubbed by Rolls Royce, so in a fit of pique, he made some superior cars that were offered to heads of state. Unless you are in the presence of this car, it is hard to imagine its scale. The engine block is six feet long, and tires come up to your waist. They are now considered to be the most valuable cars in the collectable world. I have seen five of the six at various museums. 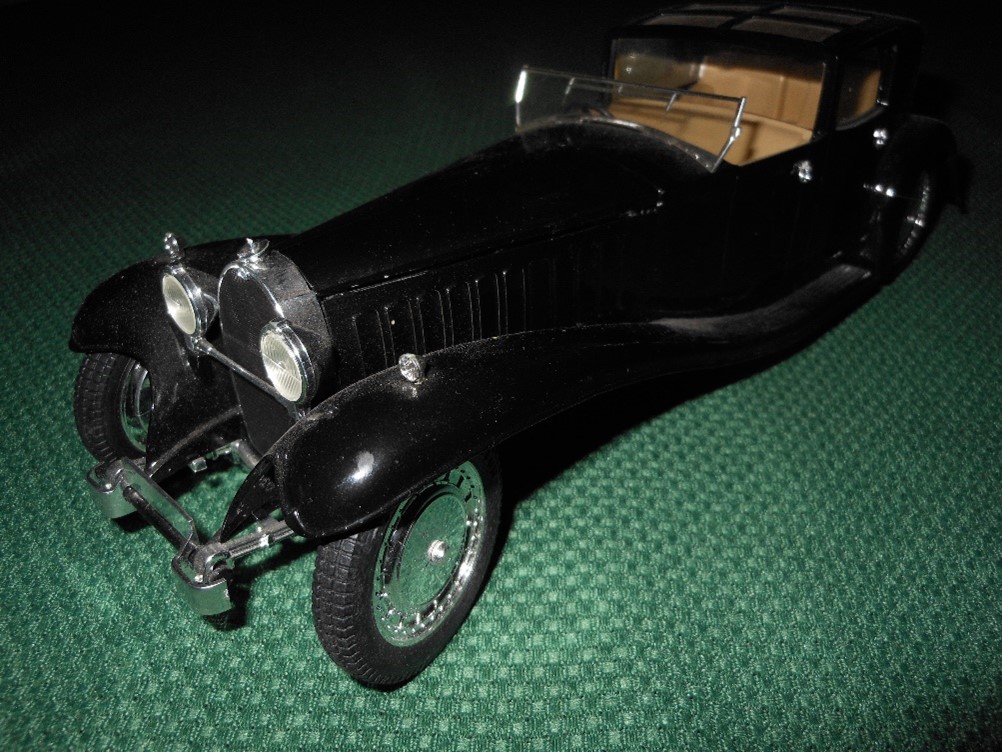 As a final touch, I bought some lithographs for the wall in the family room to replace the framed puzzles that Sara had mounted. (Sorry Sara, but old English cottages are not my thing). One of these prints was the last one that was available for sale. 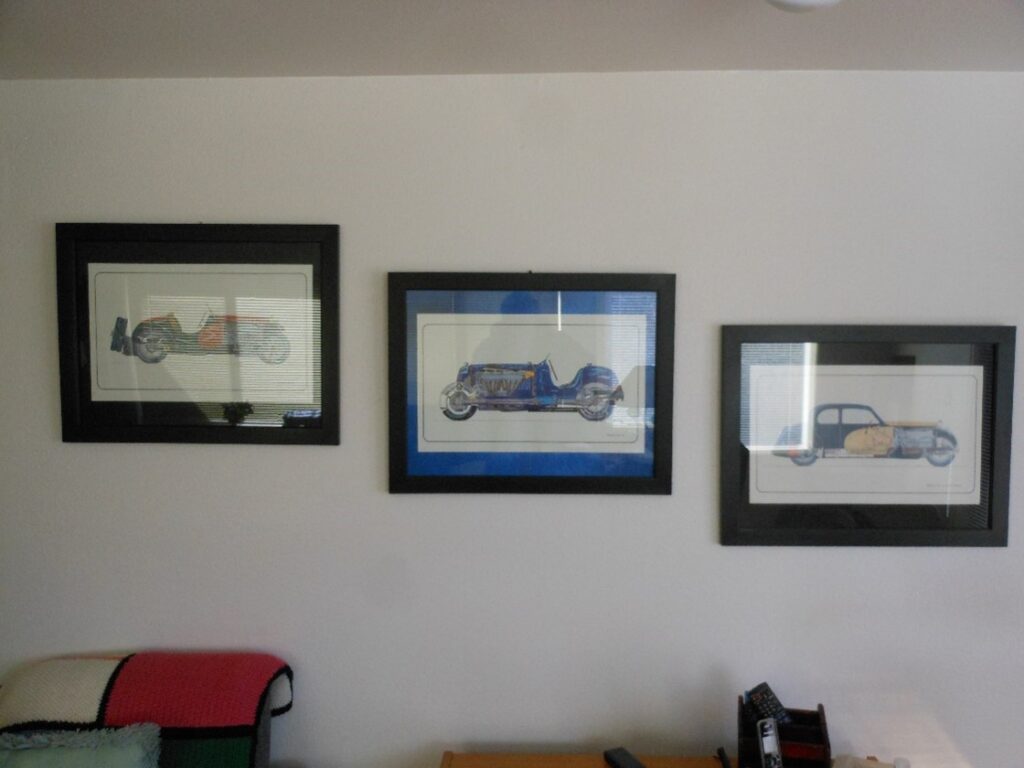 END OF THE ROAD

So what happens at the end of the road for these model cars? I think they should be given to a growing boy who will know nothing about them, so he can run them over his rug and down the hall. Yes, they will get beat up, but they may cause an incurable car infection in the boy that will result in a life-long passion that will start him reading books, gaining knowledge and keeping him occupied for the rest of his life.