While driving in Germany, I learned a new way to give an insult to another driver who makes a dumb move. You pull beside him and tap your forehead which means, “Think about it.” I understand that this gesture may now be outlawed as being too inflammatory. I am extending this gesture to the EV (electric vehicle) community not as an insult, but rather as an indication to think about some of the fundamentals that effect the wholesale adoption of EVs.

You and I as outsiders looking in cannot really know to what depth industry leaders have investigated all the ramifications of such a massive industrial shift. It is indeed a significant shift that is comparable to Henry Ford and the Model T introduction of the car assembly line, which resulted in the end of the horse and buggy by providing low cost cars for the majority of the population rather than just the wealthy.

TAP NUMBER ONE ON THE FOREHEAD – DESIGN

My first tap on the forehead goes to the design and manufacture of the EV. An ICE (internal combustion engine) car has the following assemblies that no longer are necessary for an EV: engine, transmission, differential gears, fuel system and cooling system. An engine and transmission are very expensive parts that require a big budget and long lead time to design and manufacture. In their place, we have an electric motor, battery and power electronics. Both vehicles have sophisticated electronic systems using high powered computer circuits and substantial software programs.

It is simpler to design an electric motor, which only has a couple of moving parts, rather than an ICE, which has hundreds of parts. 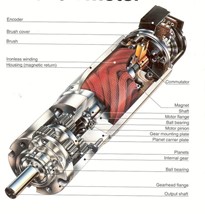 The design and manufacture of the DC/DC converter, the inverter, voltage control unit and battery charger for the EV is much easier than the ICE mechanical components. It is known technology and uses existing manufacturing methods. The benefit of all this is that we not only see new manufacturers popping up like Tesla and Riven, but we also see the existing old line manufacturers rapidly coming up with new vehicles with novel powertrains fitted to bodies made using established mass manufacturing methods. 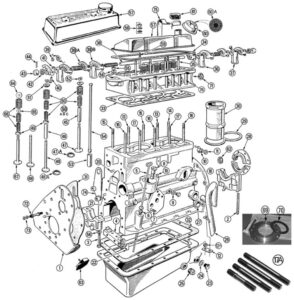 Significant research and design attention and colossal resources are being applied to battery design and manufacture. It may well be the design and manufacture of the battery that will determine the winners and losers in the emerging competition for market share. Lithium ion battery technology is dominant now, but new research may come up with a battery that captures the market by having greater storage capacity, faster charging time, and one that cannot self ignite.

It is amusing that ICE technology stole the market from some very popular battery vehicles at the dawn of the automobile, and now the battery is stealing it back.

We have an unstoppable avalanche starting. Mass production is assured, and by the end of the decade, YOU may well be driving an electric vehicle. Let’s make another tap on the head gesture and think about some implications for our society.

The ICE runs on gas and diesel; there are a plethora of service stations where you can refuel your vehicle to continue driving. Refueling seldom takes more than ten minutes. It took several generations to build up this infrastructure. Take a moment to think about how this service is put together. Somewhere there is huge rig drilling a hole in the ground or in the ocean floor. From that hole, raw oil is piped to an ocean vessel or a railroad tank car. The raw oil goes to a refinery somewhere in the world, which refines the oil to gasoline. This gasoline is delivered by ship, pipeline, truck or rail to a distribution depot. From the depot, it usually goes by tank truck to the service station storage tank, and then by pump to your gas tank. 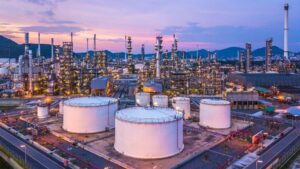 This is a large scale, expensive infrastructure that took trillions of dollars and a century of time to build. It can be completely abandoned as useless for support of an EV. Gigantic industries will collapse. In time, economies of entire countries will be altered and, in some cases, ruined.

What the EV requires is a massive amount of electrical energy generated by many technologies: gas and coal-fired power plants, atomic energy, hydro dam turbines, windmills, solar farms, roof panels and who knows what else. From the generating source, the electrical energy is conditioned to a uniform specification, which for us is a 60Hz sine wave. This conditioned energy is transmitted in enormous quantity by transmission lines requiring huge towers and tracks of land to function. A complex network of switch gears routes this bulk energy to large substations, where is it divided and transmitted to smaller substations, and then finally it goes to a special charging station or to you home. You plug in your car to a charging port, and either in an hour with a fast charger, or several hours with a standard charger, or overnight at your house, the battery is recharged. 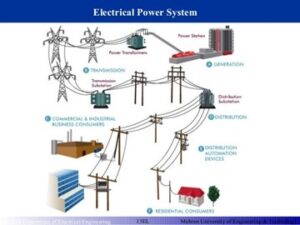 Now comes the time to ask:
How much electricity will we need?
How will it be generated?
How will it be distributed?
Better grab your wallet and take out some trillion dollar bills as you are going to need them.

If the Google data is accurate, we can roughly calculate a cost based on the statistic of 283,000,000 registered vehicles on the road and 140,000,000 housing units. If we accept a projection that 50% of the vehicles in a decade will be EVs, then that would indicate that the number of EVs will just about equal the number of housing units.

From Google we learn that the average house uses about 40KWh per day. If we multiple that by 140,000,000 housing units, it gives us a consumption of 5.6 billion KWh per day to run our houses. If you charge an EV on a 9600 W charger 4 hours a day, it will use 38.4 KWh. In other words, we can roughly estimate that charging an electrical car is the equivalent of having a second house. Since the number of vehicles will about equal the number of houses, the electrical grid must support the equivalent of double the number of houses that are currently on the grid. That comes to 11 billion KWh per day.

Consider that residential electric consumption is only 40% of total consumption, I think I see a problem looming on the horizon.

How will the additional power be generated?

That’s an easy one to determine. We will do it with solar on the roof of the house.
OH?

Here is a chart of existing generation: 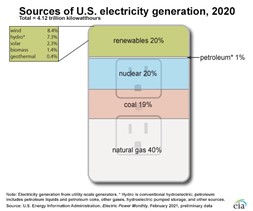 60% comes from burning hydrocarbon fuel with solar providing a measly 2.3%.That is better than nothing, but it is a long, long way from what is required. If generation is hugely increased at the existing ratio, I think you can justifiably say that EVs will not solve the greenhouse gas problem; they will just shift it to the power plants. BUT – look at nuclear power. Flip that with the hydrocarbon generation, and the picture changes drastically. Unfortunately, we will all be killed by radiation. Just look at all the nuclear subs and aircraft carriers that have blown up, and how France has been decimated by all the nuclear power plants that had a Chernobyl result.

WHAT? There have been no accidents?

Then why are we so afraid of nuclear power? I think it is mostly because we do not understand it, we are not informed of the major technological advances that are taking place, and we tend to forget we have learned from past mistakes. It is now possible to build a plant that cannot blow up. The pot of gold at the end of the rainbow is if the current success with nuclear fission can be scaled up, then unlimited radiation free power becomes available. We will essentially have created a sun on earth. In the meantime, I think we better get on board the nuclear express and start building.

Currently, Highlands Ranch, CO does a brownout on hot days when all the air conditioners are turned on. Care to plug in a few thousand EVs? Build the expanded capacity or face electricity rationing?

What will be involved in expanding the transmission network? I remember the old feedbags that were used by farmers. The neat thing about the feedbag was that they were sewn closed using a special stitch that once it started to open the bag, it could be pulled, and the whole bag would pop open. Significantly increasing the power capacity of the electrical distribution network will be like pulling that string on the feedback – everything will just pop open. If you double the output of a power plant, you have to double the size or quantity of the transformers and switch gears, which leads to doubling the size or number of transmission lines, in addition to doubling the substation capacity, and even greatly increasing the size of the “pole peg” transformer feeding the house.

Care to think of the cost of changing out 140,000,000 pole pegs, doubling the sub stations, rights of way, and the amount of copper required for doubling the transmission lines and making an oh-so-huge switch yard for the generating station? It is an even bigger problem for wind generation and solar power due to the dispersed layout.

Think about it, then buy some stock in a copper mine.

We take a car into a garage or service department to have the oil changed, transmission serviced, and mechanical failure of the engine or other mechanical system repaired. Anyone can replace a 12 volt battery, and the only electrical system is the battery plus an alternator putting out 100 amps at 12 volts. Loosen a belt, disconnect a wire, undo two bolts, and you replace the alternator. Make a slip with a screwdriver and touch a 12 volt live wire, and you only throw a few sparks. Make this same slip with a screwdriver on an EV, and they take your charged body to the morgue if you get hit with 800 volts at 200 amps working on the Porsche Taycan. There is a reason that emergency personal approach an EV wreck with trepidation.

The whole design of the service department will change, and mechanics will all need special training. There will also be much less need for service as routine maintenance is minimal, and there are fewer things that can go wrong. Could centralized repair/exchange at special depots be on the horizon? It works for the military.

MY FINAL TAP ON THE FOREHEAD

I really look forward to the EV revolution. I have driven these cars and really like the performance. I expect there will be a lot of changes as the technology matures. Look how far we have come from the Model T. We are entering an exciting time, and it will be interesting to be part of it. The ICE will be with us along with the infrastructure for a long time yet. The ICE is actually in a golden age now, but we will witness the death of that dinosaur as civilization marches on.