Thanks to Terry Johnson, I have been introduced to the “Friday at 11 Club.” You may recognize Terry’s name – he owns the all original 1940 Lincoln Continental that I was able to reference when I restored mine. I am not sure this Friday group has a name, but it is an interesting informal group of old gearheads that have been meeting in a storage warehouse for the past eight years. The members just show up at 11AM on Friday full of gearhead enthusiasm. By Noon, it is time to adjourn to a nearby old school Mexican restaurant to sit at a long table that is reserved for the group and order your favorite heartburn dish. Digging into the pockets of faded blue jeans, these gearheads pull out their cell phones in order to show off family gems, which are mainly early Ford flatheads.

Here is a typical conversation:

“Oh yes, I remember that roadster; it used to belong to Bill. When he died, I think his son got it and wrecked it on South Santa Fe. That’s when Dave actually got it out of the junkyard and fixed it up. When I bought it from Dave, it was painted yellow, which was really bad. I put it back to black, rebuilt the engine, and put on the triple carb manifold. Runs really good now. I keep it at my son’s place as with my bad leg it is not fun to shift it anymore in today’s traffic.”

When we pulled up and parked at the warehouse, I had a funny feeling that I had been here before. Walking inside this unassuming building, I was met with an eye watering display of absolutely gorgeous cars. Along one wall was a stack of cars on platforms, which triggered my memory. At least 12 years ago, I came to this warehouse to see a custom vehicle that was being fabricated. (I remembered the stacked cars against the wall). In particular, I remembered a black 1949 Mercury coupe. 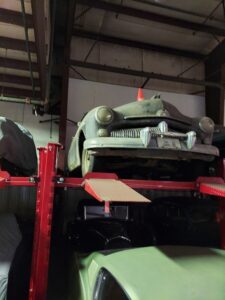 Scanning the wall full of perfectly clean, stored cars, there sits a dirty black coupe that looks totally out of place.

Low and behold, it is the 1949 Mercury coupe that I remembered. It is covered in a layer of dirt that proclaims this car has not been moved in a great many years. Why not? What is the story? To us old school hot rodders, the 1949 Mercury coupe is a fabled car. It was featured in the James Dean movie, Rebel Without a Cause and was a favorite car for the early, now legendary, “lead sled” hot rod customizers. The names of George Barris and Gene Winfield come to mind. 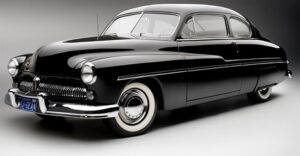 There is no way to tell how the finished custom car would look except that it would be “chopped” (i.e., top of body is cut down) and “lowered.”

Our group made an inquiry to a staff member at the warehouse. The response: “It is in paid storage, and NO, it is NOT for sale.” Since information is not forthcoming about this car, I will, in my best journalistic tradition, make up a story that I think fits the situation. In fact, I’ll go one better – I will make up three stories, and you pick which one you think is correct.

The daring daylight robbery of the bank in Arapahoe County has never been solved. The getaway car was a black 1949 Mercury coupe that was chased by the State Patrol pursuit car down Santa Fe Drive. Speeds of over 100mph were recorded. It was a surprise that the modern patrol interceptor could not catch the old Mercury, which, by the sound of it, had an ancient flathead engine. At Sedalia, the Mercury coupe turned off onto Highway 105 barreling down the road at extremely high speed to Monument, where it crossed I-25 followed by crossing Highway 83, and then got lost in the Black Forest area. 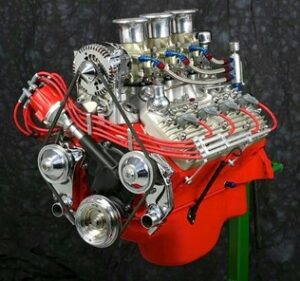 An investigation by the State Patrol revealed that the car may have belonged to an old outlaw street drag racer that used to race it for money on Morrison Road. If this is true, it would have a flathead engine, but one that is running on alcohol and nitro methane. In racing tune, it can develop over 400 HP, which explains why the Mercury coupe could not be caught.

Best guess is that the robber wanted to save the car and had it secretly put in storage where it sits to this day. If and when the car is brought down from its perch in the warehouse, the presence of a bullet hole in the trunk would confirm that this is the getaway car used in that long ago robbery.

When the opportunity came to a gearhead to buy the old 1949 Mercury coupe from the widow who no longer wanted the car, he jumped at the chance.  He paid $750 for it, which was a fair price considering the condition that it was in as it was worn out from use as a family car. As a result of the new owner’s military service during WWII in the Eighth Air Force as a crew chief on a B-17 bomber, he had good mechanical skills and familiarity with engines. He felt that this would be a good project for him and his fourteen-year-old son to work on. The boy was just nuts about hot rods and would scoop up Hot Rod magazine and read it the minute that it was put in the mailbox.

From the single car garage opening to the alley behind the house, they took out the family Chrysler Windsor and parked it in the driveway and pushed in the old Mercury coupe to take its place. Using a drop light and the 100-watt bulb in the center of the garage, they worked together to make a hot rod that the boy could drive to school as soon as he turned sixteen. He let the boy make mistakes without scolding him; it was, and still is, the best way to learn what to do and what not to do. Skinned knuckles and wasted lawn mowing cash are harsh teachers.

As the boy approached sixteen, the Mercury coupe had evolved into a real hot rod that the now young man began to drag race on Sundays at Lowry Air Force base. That all stopped when he got drafted into the Air Force, trained as a jet engine mechanic, and then shipped to Vietnam to work on the F105 “thud” fighter bomber used for tactical support. It would be inviting trouble if he just left the Mercury parked in front of the house, so he made a deal to put it in long-term storage in a warehouse.

Unfortunately, while serving in Vietnam, the young man never heard the mortar round that arced into the revetment where he was busy underneath the fuselage tracing down a leaking fuel line. The Mercury still sits in storage waiting patiently for his return.

On warm summer nights, “Mark” would pick “Julie” up after her shift at Fitzsimons Army Medical Center, and they would go to the Sonic drive-in on Colfax for a malt and burgers. The jet black Mercury was an ominous standout from the T-Birds, Corvettes, and 1932 Roadsters cruising the parking lot. The Mercury was a great cruiser, and the Smitty mufflers would gently “rumpty rump and burble” as they cruised down Colfax past the high school. If a high school guy in his 1957 Chevy challenged the Mercury, the coupe would blast out a fearsome snarl of power from the full race flathead, which was punched out to the limit. The rear end squatted down and laid rubber halfway down the block as it pulled away from the incredulous Chevy driver.

As the sun went down, Mark and Julie drove up to Look Out Mountain, parked in a quiet spot, and listened to the buzz of the vibrator in the old vacuum tube radio as it played the big band songs from another era. It brought back memories of the Elitch Gardens Tracadero Ballroom that they enjoyed so much as college kids. The flat front seat of the Mercury is made for close embracing as the lights of Denver spread out in front of them. They could see the revolving white and split green light marking Stapleton Airport sweep the sky and just make out some landing lights of late arriving aircraft. It was then, with this vista shining in front of them, that they renewed their love for each other.

She had been flying in the air ambulance helicopter for over a year when the call came in about a bad accident on I-70 at the entrance to the tunnel. High altitude rescues were always a matter of concern, but this day the weather was calm with broken clouds so the pilot of the air ambulance helicopter, who had done many hair-raising combat rescues in Vietnam, felt confident that he could handle this one. What he was not prepared for was the lack of proper marking on the high-tension power lines near the accident site. The thick steel and copper cables were invisible to him. The impact sheared off the rotors and sent the helicopter slamming to the ground where it burst into flame.

There was to be no recovery from Mark’s grief. The loss of Julie was just too much for him. Mark never drove that Mercury again. Instead, he put it in storage, arranged for automatic payment of the storage fee, and moved to Texas to work in the oil fields. He repressed the memory of the Mercury and that horrible accident that deprived him of his love. The coupe just sits on its perch as a forgotten memory.

Does one of these stories ring true, or is this Mercury sitting on the perch as a “round-to-it” car? (It will be taken down and restored as soon as the owner can get “around to it.”) Certainly, someone someday will take the neglected dirty thing down from the perch, clean it up, recommission it, and put it back on the road where it belongs. The youth of today will find it an interesting oddity seeing the coupe on the road. You can be sure it will tug at the heart strings of the “Friday at 11 Club” members who have memories of the old Colfax Avenue scene back in the day.