No, I am not talking about politics as that is beyond wacky. What I am talking about is the world of hot rods, restorations and restomods. Everything is perfectly rational … except for those things which are not. Here are a few case histories for you to experience this wacky world . . . 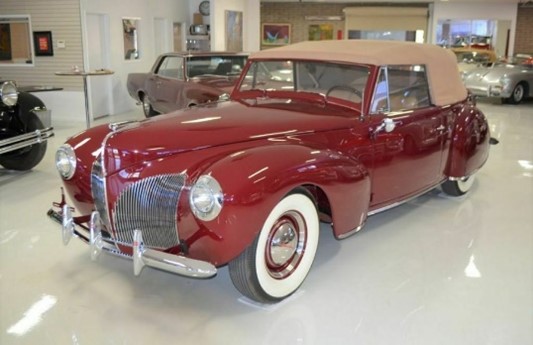 I get a call from Bobbie Wolff; she is a long time member of the early Ford V8 Club. Bobbie has a love affair in her life. It is with a gorgeous maroon 1940 Lincoln Continental convertible. She unfortunately lost her husband who was an expert mechanic and kept the car running to perfection. Following a successful award-winning show at the Early Ford V8 Club National Meet, the car was left idle for three years. A local club member not familiar with the 12 cylinder engine made a valiant but unsuccessful attempt to get it started.

I offered my services as I am quite familiar with the engine having done a full restoration on the same model Lincoln. I immediately was able to determine that there was no spark present, making it impossible to start the engine. It was then my chore to diagnose and fix the problem. As an amateur mechanic, if you derive pleasure from working on difficult engine systems, you will go orgasmic working on a Lincoln V12 distributor with its dual coils, two distributor caps, and hidden dual points that are difficult to access being nestled behind the radiator.

My trusty volt meter told me that one set of points was not working. I was foggy on what the voltages should be, so Terry Johnson let me measure them on his V12 Continental so I would know the correct coil voltage. I wondered if there was a bad coil? I removed the coil and measured it on the bench. No problem. My next thought was there must be either open points, a bad ballast resistor, or a broken wire. I checked the wire and connections, then I disconnected the wire to the ballast resistor for that side of the dual coil and substituted an external resistor. Yipee – I got the right voltage! Obviously, this indicated the ballast resistor is bad, but to be sure, I reconnected it, and I GOT THE RIGHT VOLTAGE. When I pressed the starter, the engine ran perfectly.

So why did it run? I do not know. It is just a crazy engine driving me wacky. 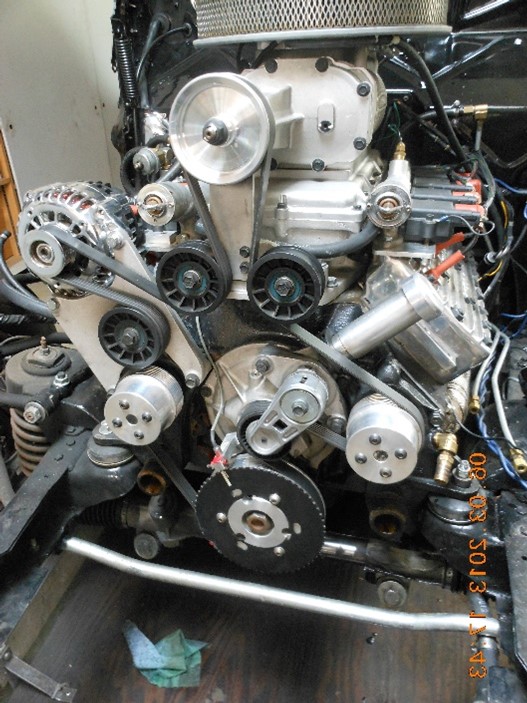 For my old age crisis (I could also say at the far end of middle age crisis), I built a supercharged, fuel injected, crank triggered, coil-on-plug flathead engine for my 1940 Ford coupe. It ran fine on the test stand, so it was time to put this engine in the car and tune it for the road. I enlisted Ray Ziem to help me set the timing. Ray was a Lincoln factory engineer and did timing for factory cars using the old-school method of changing springs and fly weights in the distributor. He was impressed to see me change timing by just entering a number into the computer.

One Sunday we went down to the Englewood test track (people think it is just a public street that runs by the light rail track), and he timed accelerations as I progressively advanced the timing. We found the optimum timing, and then we started wondering just how much timing we could put in the engine before it would start detonating. Most flatheads like about 5 degrees initial advance. To push the envelope, we went to 10, then 15, then 20, then 30, then 40!! Guess what? NO DETONATION! Any more advance, and the engine might run backwards. The engine simply did not detonate.

Why? I have no idea. I guess it is just another wacky engine.

My 1962 Pontiac Bluebird restomod is complete; it even has a “bonded title” and collector car license. As a lost title purchase, it was incumbent upon me to dance to the bureaucratic tune of the Colorado DMV by running around getting inspections and filling out forms with arcane wording.

This was a wacky exercise, but there was more to come.

The engine is a Chevrolet Performance LS3 with a factory controller and factory harness. Upon completion of the installation of the engine and all the associated assemblies, the engine fired right up and sounded great. Blipping the throttle made the mufflers bark as the RPMs went crazy. A quick spin out the garage door, onto the street, and sitting on a wood crate verified that the engine, transmission, and brakes were all functioning.

Once I installed the sheet metal and glass, next up was the big task of creating custom upholstery at the shop of Chris Monaco. My friend Dusty brought up his trailer to transport the car. Should be simple, right? Just fire it up, drive it into the trailer, and off we go to Chris’s shop. I started the engine, put the trans in gear, stepped on the gas and NOTHING. I pumped the pedal, and engine just stayed at idle. Dusty created a vacuum leak to force a high idle, and we got the car to Chris’s shop.

When I got the car back, the engine started fine. Now that the car is legal to drive, I hopped in, eager to wring it out. I started the engine, pumped the pedal and NOTHING!

Just what I need – a wacky gas pedal!

I have a friend who is a restorer and hot rodder in Melbourne, Australia. He does perfectionist work with Mustang restorations and has a 1932 Ford rod that has been under construction for many years. He has installed my multiport fuel injection system on the flathead engine. What is wacky to me is how he can possibly lubricate a conventional car engine down there. When I visited the airplane museum in Munich, I marveled at the Mercedes engine that powered the Messerschmitt ME109 that was Germany’s foremost fighter plane in WWII. What is so striking is the fact that the inline six engine is mounted upside down! Somehow they figured out how to run it that way.

How did the Aussies figure out how to do the same thing and make an oil pump pick up work upside down, and why do they not fall off the earth? They must have an anti-gravity secret that they do not share with the rest of the world.

They are just plain wacky, I think. (No telling what he thinks of me).

After hearing the above stories, you may be puzzling along with me what caused the wacky issues in the cars. A part decided it couldn’t get along with another part and went on strike? Is mercury in retrograde? Is someone playing a joke? I figure it comes down to technology just having a mind of its own and being determined to keep me on my toes.