Here I am on the sunny coast of Spain in a small city called Denia. As I write this, the gathering for my granddaughter’s wedding is assembling. I think half of the United Nations will be represented at the ceremony; guests from Germany, Syria, Qatar, Switzerland, England, El Salvador, and the United States have already arrived.

I rode in my daughter’s Audi A5 from Munich to their vacation home in Spain. It was a two day trip and roughly equivalent to the distance from Denver to Los Angeles. When going to Los Angeles from Denver, you drive through 5 states: Colorado, Utah, Arizona, Nevada, and California. To go from Munich to Spain, we drove through five countries: Germany, Austria, France, Switzerland, and Spain. To be able to drive through 5 countries in the same distance gives perspective into the size of Europe compared to the United States.

The drive was interesting with some very spectacular scenery. As I gazed at the beautiful countryside, I did not expect the view to be blocked by so many semi-trucks. I counted one truck on average every three seconds coming at us in the opposing direction. Now add in all the trucks going in our direction and factor in the price of fuel at $9 a gallon, and you can understand why the cost of goods is higher here. The semi-trucks are the cab over variety due to length regulations, so the driver gets to bounce over the engine while looking through a panoramic windshield.

The A5 Audi has a four cylinder turbo diesel and can really scoot when Jurgen, my son-in-law, pushes the speed limit of 120 km/hr. It travels 500 miles on a 60 liter tank of fuel. (Go calculate the mpg as a homework exercise).

The other day, my daughter Vicky and I took a short ride on a small catamaran ferry to the neighboring town. It reminded me of flying in a Goony Bird C47 across the hot Arizona desert as the catamaran pitched up and down in the moderately rough sea. Fortunately we both have cast iron stomachs, and we were able to eat lunch, but Vicky ended up with a small case of delayed sea sickness. I never knew there was such a thing. 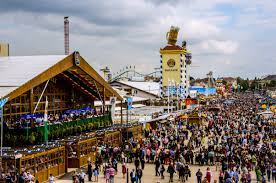 Some wedding guests who arrived from Munich reported that Octoberfest attendance was down dramatically due to 10 degree centigrade temperature and rain (9/5 X 10 + 32). In addition, some businesses are not reserving tables due to COVID concerns and possibly economic considerations. To give you an idea of costs: it is $80 per person to sit at a table, and a liter of beer is $13. We hope to give it a shot next week when we return from Spain to the house in Munich.

Now for Car News . . .
1. I left the Pontiac “Bluebird” with Dave Fitzgerald to have a naughty fender and hood brought into line.
2. We stayed at a cheap motel in France and parked near a Rolls Royce convertible. That counts as another spectacular view in my opinion! Used the money we saved to buy a nice dinner in the town square.

Now it’s time for coffee on the porch, which overlooks the town and the Mediterranean Sea. Next up – getting ready for the marriage festivities.
Charlie