Specialty Equipment Manufacturers Association in Las Vegas, or SEMA, is the largest hot rod show and convention in the world, and the 2021 event was the first in the COVID-19 era. The travel plan was that Dusty Price and I were going to drive the Bluebird (the 1962 Pontiac restomod that I introduced to you in an earlier article) from Centennial, CO to Las Vegas. We thought we had plenty of time to get it ready – HA! The Bluebird still does not have an interior, and Dusty got nailed to be the lone guy at his hot rod shop as his partner developed a medical problem. On to Plan B – we would take the G35 Infinity, which is a nice, fast comfortable car – that didn’t work out, so it was a last minute ticket on United Airlines window seat 37A.

I cheat a little on boarding flights because as a very senior, senior citizen, I can only wrestle so much carry-on luggage and take so much jostling for the overhead space. Sitting in the window seat, which has minimum space, I eyed with foreboding the stream of boarding passengers coming down the aisle regarding the occupancy of the middle seat as they announced that the flight was 100% full. As passengers continued to walk by, I thought, “That is a cute gal; maybe that college kid with the back pack?” I tried to remain hopeful about who would be taking the middle seat. But then I saw a passenger totally filling the aisle as all 300 plus pounds of him lumbered toward me like a tank. He was the seat buster and dunnage that was to be my companion. For one hour and thirty minutes, I could not move.

Vicky, my daughter, had given me basic lessons on the Uber app, so after landing in Vegas, I was able to summon one from her coaching. A fantastic computer program that uses GPS technology shows you the street map with your assigned driver as he drives towards you with an estimated time of arrival – my screen flashed 8 minutes. The nice guy near me that helped me make the reservation hops in his car and leaves. 5 minutes before my Uber comes, I see that my driver’s name is Jesus in a BMW. I will be safe in the hands of Jesus I think as he inches along like a bug on the map. 3 minutes to salvation, but Jesus takes a left turn where he should have taken a right. Now it is reset for 8 minutes to arrival. Back crawls the bug on the map away from the airport. Jesus goes down the wrong road and misses the turn – 8 minutes again. I think he is lost. How can an Uber driver not know where the airport is when he has a map right in front of him? Another loop, and I really need salvation now. I manage to cancel Jesus and get another Uber driver, who arrives in 3 minutes. Now I’m off to the Sahara hotel, which is the last stop on the monorail that will take me to the convention center in the morning.

Opening day of SEMA begins with eating a $25 lousy breakfast of powdered eggs and cold, overcooked bacon at the Sahara (I recommend not staying at this hotel). I take the monorail to the convention center, which is one mile long with four halls that are each about a quarter mile deep and filled with cars and car stuff. As I get off the monorail that overlooks the enormous parking lot full of semi-trailers and exhibits, I hear the snarl of uncorked Ford flat crank Mustangs destroying tires in drifting exhibitions. It looked like a house on fire in that area from all the rubber smoke. There is a sign up for a ride along if you want to find your way through the haze!

I head for the South Hall and the new product showcases, which, for me, is a highlight of the convention. I saw some really nice new stuff mixed among hardware to lift a pickup truck high enough to make it impossible to get into. Why do they do that? 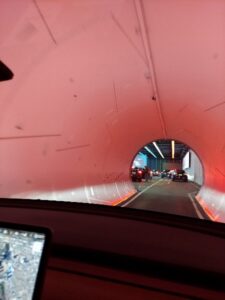 I walked outside to the back of the hall to experience an amazing operation. They cut a one-mile tunnel under the whole convention center and a gaggle of Tesla cars were running through it ferrying us from one hall to another. The intention is to automate this in the future with electric cars zipping through the tunnel with no exhaust fans needed. The electric future holds a promise of amazing technological feats.

During the event, I connected with Russ Newnes and his son, Tommy. Tommy has a Tesla S, which they drove in from Denver. Tommy does gig work as an Uber driver in Vail and really knows how to handle traffic. We wear out our legs and back looking at “stuff” all day. Russ and Tommy invited me to join them and some of Russ’s old California buddies for dinner. I have mastered my cell phone enough to coordinate the pickup at the Sahara entrance. Waiting to one side of the taxi line, I am approached by a young, black guy who was trying to break into the taxi line. Some yellow-jacketed security guys show up; one comes up to me and says, “Sir, better stay away from that guy.” So noted. They motion for him to leave, which he ignores. Walking down the drive comes a big dude in a black suit holding a Glock close to his vest and motioning to the black guy to leave. He takes the hint, and I gladly get into the Tesla when Tommy arrives. “What happens in Vegas, stays in Vegas.” I get it, but I think I might want to stay elsewhere.

We had a great buffet at the South Point Casino where I got to hear an amazing array of stories from Russ’s hot rod buddies, two of whom were retired firemen. I thought only military guys like myself had war stories to tell between swallows of beer. I never knew that the task of ordering a fire engine could be so hilarious. It turns out the casino was hosting cowboys from the rodeo finals that were in full swing that week. You could easily spot the rodeo cowboys because they wore Wrangler jeans, snap button shirts, black hats and limped when they walked. 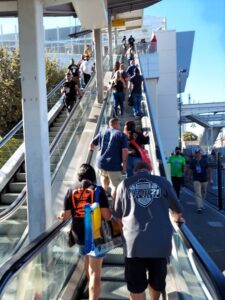 The next three days were spent walking the 26 miles of aisles in the four halls of the convention center. On the second afternoon, I left a little early to beat the lineup for the monorail. The line was stalled at the base of the two-story high escalator leading to the landing. The line finally started moving because there was no power, and we had to walk up the escalator. Just what my sore feet and back needed – more walking.

After I had a short nap at the Sahara, it was off for another fun night with the gang. This time dinner was Mexican food with oversize margaritas that quickly help relieve my back pain from at least two miles of walking. Unfortunately, the margarita couldn’t help me forget getting my nice leather briefcase stolen while waiting in line for an eleven dollar hamburger and three dollar twenty five cent bottle of water. 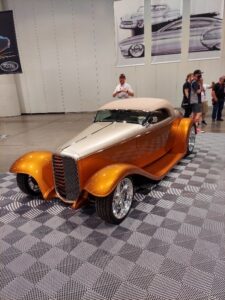 But I should quit my bitchin’ because on the last day I got to see the Chip Foose collection of cars that he built. These are the best of the best – totally great style and perfection in fabrication. My favorite is the Jerry Magnuson built 1932 Ford roadster (sort of resembles one). Jerry is gone now, but his wife Maureen drives the car. She and Sara hit it off when we met her on an earlier California trip. I didn’t get to see her, but I did sneak my card into the car. (Go figure where the headlights are).

Another highlight was at the Chevrolet booth where I inquired about the trouble I was having understanding the factory wiring harness that is installed on the bluebird’s LS3 engine. This nice, big guy took me over to a display board with the laid out harness and described every connector and its purpose and gave me a name and number if I needed more help or information. I thanked him for his help and commented on how knowledgeable he was about the details of the product. He responded that he should be as he was the engineer in charge of the entire product line. That made my day!

One of the things I love about this event – lots of interesting people you get to meet! While I was sitting on a bench in the West Hall taking some recovery time from all of the walking, a sharp looking guy sat down next to me. We swapped car talk, and I showed him some pictures of my restorations. He owns two special dealerships in Miami and is the distributor for Nasoil, a premium ceramic paint coating. He gave me a lot of technical insight into the design and application of ceramic coatings, and then he took me to his elegant booth and gave me boxes of two of the products.

There you have it – the behind-the-scenes SEMA experience, sore feet, back, and all. Even with the expense and hassles, the wheeling, dealing and super car show are not to be missed.