I came up with a brilliant idea for a way to keep my monthly blogs novel without any effort on my part. I have been doing some traveling  and am about to leave for SEMA this coming week, so that makes creative writing a burden. Then I thought, why not get Kelly Johnson, my virtual assistant, to write a blog as a “guest.” If you think the perfect grammar and the careful phrasing of my blogs is the result of my talent, think again. I often write trash that Kelly turns into treasure that would make Mrs. Van Duson, my high school English teacher proud. AND I have learned that women are some of my best fans. They like cars and car stories. So here is one from Kelly.

(Item to Note: I included a few comments in the article below. My initials – CSC – are listed after my comments).

I admit, I can’t come close to the engaging style and riveting humor of Charlie’s writing. (Oh cut that out Kelly flattery just swells my head, CSC) He suggested I write a guest article for this month’s newsletter. With your indulgence and patience, I’ll take you on a different kind of car journey. One that has proven to be scary, thrilling, perhaps a bit dangerous, but always memorable . . .

A Drive Down Memory Lane – My First Car

As I was getting in my car the other day to run errands, I drove past a local high school and saw that school had ended for the day. Kids were laughing, joking and hustling to their cars. This took me back to my senior year in high school and getting my first car – a bright yellow 1973 Volkswagen Bug. What did this little car mean to me? In a word – freedom. Freedom from relying on rides from parents or friends to get to places; freedom from taking the bus to school; freedom to just drive around if I needed some quiet time (AKA a no parent zone). I never had a “dream” car in mind. Hell, I just dreamed about having my own transportation! The VW did present a minor, initial challenge in that I had never driven a stick shift before. This started the first of a handful of lessons to learn the rhythm of shifting. My dad would take me out on weekends to let me practice and get used to driving a car that was not an automatic. This is where the term “standard H” became a part of my vocabulary. 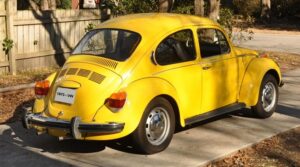 Once I passed the “Dad test,” which may have come sooner than expected as my parents also wanted not only the freedom from having to drive me places, but also realizing that my having a car equaled being able to run errands for them, I was off and starting out by getting myself to school. (I want to take a moment to add a side note here. If I had had to take the “Mom test,” my mother and I would not have made it down the block. In fact, we may still be in the driveway! Anyone else have the situation where one parent seemed to be assigned to teach the kids in the family how to drive?)

Once I started driving myself to school, I came to realize I had the brightest car in the lot. If nothing else, this made it easy to spot my car from any location in the school parking lot. I had another easy identifier for my car. The license plate letters ended up being one letter off from my initials. If I had been able to get the plates a month earlier, I could have had “personalized” plates!

This car saw me through the ups and downs of life and ran like a champ for the first four years of ownership. Starting with the fifth year, my little spot of sunshine became the devil from hell. It was as if the car decided it hadn’t had enough attention for the previous four years and was going to make up for that with a vengeance.

My first job after college graduation was teaching high school Speech and Psychology in a small district about an hour outside of Aurora, Colorado. My VW Bug racked up the miles as I drove an hour each way, 5 days a week, to get to my job. One of my students also had a yellow VW Bug, so he took to parking close to me so our Bugs could be buddies in the lot. His Bug ran fine; my Bug decided to start acting up. It would not turn over one day, so 3 of my fellow male teachers came out, got behind my car and pushed it so I could pop the clutch to get it going and drive home. 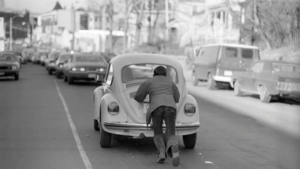 I couldn’t thank my colleagues enough for their help, and I told them that before they came out to help, I was almost at the point of resorting to punching a hole in the floor of my car, running furiously in place and getting momentum to get out of the lot just like the Flintstones.
(Kelly does not realize that is standard starting procedure for a flathead Ford with a 6 volt battery, CSC)

Another time on the drive home, as I looked in the rearview mirror to make a lane change, smoke started coming out of the engine. I saw several cars around me pointing and gesturing at the back of my car. I gestured back (I assure you, they were very polite gestures of acknowledgement and thanks; my rude gestures came in the form of colorful words I was saying to my car). I barely made it to the repair shop that day. My next issue with the Bug occurred during a snow storm. My wipers were not able to keep up with clearing the vertical windshield, and the ice was building up to the point of blocking visibility. I pulled over a few times to scrape off the windshield and felt like it would take me about 6 hours to get home at that point if I had to keep pulling over to clear the windshield. My spur-of-the-moment solution? I would roll down the driver’s window and holding the scraper in my left hand, reach out, scrape a clear section in the window while steering with my right hand on the wheel. Just one of my hidden talents…

Next up, when I was driving to a meeting, I pushed in the clutch to change gears and the pedal broke. Fortunately, I was able to drift to the side of the street where one spot was open for a car to park. This was before it was common to be carrying a cell phone, so my feet became my transportation back to my apartment to call for a tow truck. In case my Bug thought that I wasn’t having enough adventure in my life, it decided to chew through not one, not two, not three, but four alternators. 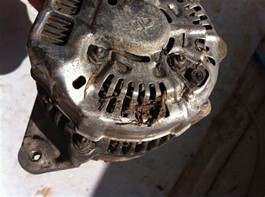 One of the biggest battles I had to do with the repair shop was telling them when I turned the heater on in the car, I would smell gas. Since the air conditioning for the car was 2 x 55 (2 windows and driving 55 miles per hour, which was the maximum freeway speed at the time), I was grateful to have a heater, even if it was the equivalent of the faintest breeze you ever felt barely moving semi-warm air only over your ankles. The guys at the repair shop thought I was the dumbest person on the planet for repeatedly telling them I smelled gas when the heater was on. I was extremely frustrated the servicemen kept ignoring this problem. I finally found a shop that carried parts for VW Bugs, and I told the guy at the store about this issue. He was kind enough to offer to come out to the lot and see if he could figure out the problem. Guess what he discovered? The gas line had leaks in it, and the gas from the leaks was dripping on the heater box, which is why I smelled gas when the heater was on. I think this may have been a sign that the days of the Bug were numbered. Or my Bug was attempting to say it was trying to blow itself up!

As you can imagine, there wasn’t much to smile about with the multiple trips to the repair shop. My bank account was feeling the number of repairs, and I basically had the towing company on speed dial. The Bug did decide to give me a moment of comic relief on one of the last trips to the service station. I was telling the serviceman the latest of 2 issues I was having with the car, and he decided to drive it around the block to check out the problems himself. As he was driving it around the block, I could hear the Bug’s car horn repeatedly honking. It may have been a while since you heard the sound of a 1973 VW Bug horn. The best description I ever heard about these horns was one my husband came up with. He said it sounded like the car was saying, “Eh, excuuuuussssseeee mmmmeeeee…” in a warbly voice. The serviceman came back in and proceeded to tell me that I also had a problem with the car horn. I laughed out loud and said I could fix that problem myself. If one of the keys on the key ring got caught in the steering column, it set the horn off. He got flustered and tried to brush off my comment but hearing that sickly horn going off while he drove around the block gave me a chuckle for the rest of that day.

After all of these issues, what was the straw that finally broke the camel’s back? I was driving to the school district office in Castle Rock to drop off paperwork. As I was just about to pass the outlet mall, I heard a loud pop, a thud and felt the front right tire die. Once again, I drifted to the side of the road, walked down the dirt embankment, went into the closest shop and asked if I may borrow their phone to call for help with my car. My husband, as always, was a champ and came to get me and help deal with the car. The Bug did not have the appropriate wrench to get the lug nuts off of the tire, so we were using what we had available in the car. My husband was trying to get leverage to loosen the first lug nut, and as he did this, the tool slipped off the lug nut, flew toward me, hit my knee, and then landed on my foot. I think I had a permanent cloud over my head as I cursed and hobbled in pain from my knee and foot being smashed by that tool. My husband made sure I wasn’t seriously hurt or bleeding and then proceeded to say, “That’s it. This POS is history. We will find a way to buy a new used car.”
And so, my first car was sent to trade in heaven.

After all of the stress and turmoil that the Bug caused, I can’t help but think that is part of the experience. You should have bumps and bruises from your first car, in addition to the fond memories, so you can appreciate your future cars even more. 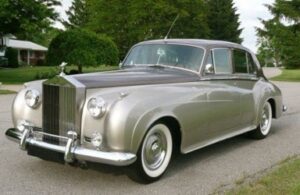 (Thanks Kelly love the replacement, CSC)