Here is the latest update on the 1962 Pontiac restomod. When making a car that has never been made before by taking an old design and adding new components, there are a significant number of unique design and fabrication tasks that have to be accomplished. If these tasks are conducted with attention to detail and skill, the finished product will look like it was produced in a factory and ready for the showroom floor. When striving for this basically unachievable level of perfection, there are several phases: it starts with the teardown and inspection of the car, followed by media blasting, corrosion removal, and primer of restored large metal assemblies. As the restomod progresses, the next step is installation of the new assemblies including engine, transmission, brakes, A/C, etc. Once these are completed, it is now down to the “last five percent.”
This phase of the project is the least understood by those who have only seen the finished product but have not been involved in the process. It is that last bit of perfection (i.e. “the five percent”) that really establishes the quality of the vehicle and increases the value almost exponentially as it lifts it from the category of a “number two” car to a perfect “number one” car. Number one cars can bring a 30% to 50% higher selling price to an affluent collector. The only problem with a number one car is that it really cannot be driven to any great extent as it will degrade to being rated a number two car as it suffers some inevitable wear and tear due to normal use.
With my 1962 Pontiac, I will be very happy to have a number two car as I intend to drive it as a normal family car and, if circumstances permit, to use it for long trips. However, even to achieve number two status, there is a large amount of detailed work that has to be completed, most of which is not obvious to the casual observer.
Here are two examples:
THE TRANSMISSION CONTROL UNIT
The Pontiac now has a state of the art, very powerful Chevrolet LS3 430 HP engine installed with a companion 6L80-E six speed automatic transmission. Back in the day, the old hydramantic transmission was shifted by a column mounted lever and mechanical linkage to the control mechanism of the transmission. The mechanical display on the dash indicated the gear selection in what has become known universally as the PRNDL (pronounced as “prindal”) pattern. The new transmission is significantly more sophisticated and can only be shifted by a very advanced electronic control module that is manufactured by Performance Control Solutions. The “driver interface panel” is a module with push buttons that send an electronic signal to the control unit to shift the transmission.
The PCS module as received is a nice CNC case with four mounting ears to fix it to the dashboard. There was no place to install this on the dash where it would not look just plain ugly. However, the dash does have a cutout where the original heater control was mounted that turns out to be the exact width of the PCS module if the ears are removed and sides of the module shaved. 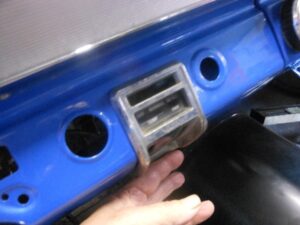 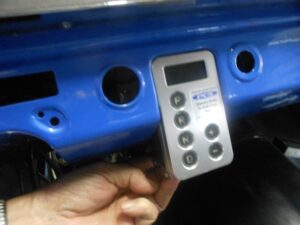 It will just be a piece of cake to make a simple mount for the module. A couple of hours and then done. (HA!) Try more like three days and then done! What looks simple was actually quite arduous to accomplish as it meant modifying a factory case and needing to be careful in disassembling the electronic guts without causing damage. The next step required calipers and a calculator to design an angled mount that would match the profile of the dash. I had to figure out how to attach the mount to the case, then very slowly and carefully make the parts using my milling machine. 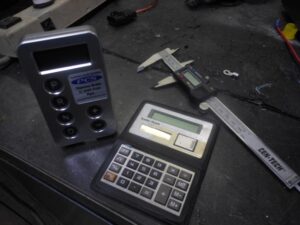 With the parts machined by a combination of measuring and guessing at the angles, it was time to determine how to fasten it to the dash without drilling holes in the dash. The solution was to cantilever mount it to the lower dash rail. Unfortunately, this proved not to be stable unless I reinforced the base so it would not act like a diving board. The result? We now have the finished mount and the unit reassembled and mounted in the dashboard. Simple, right? (HA!) 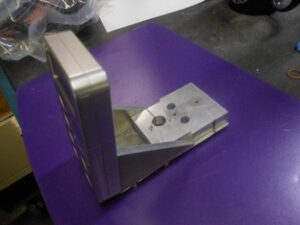 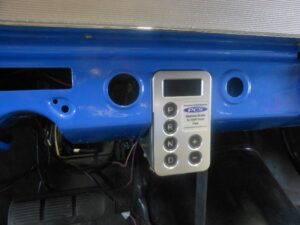 THE SEATS
Remember how cars of the sixties (what – this was before your time?) had folding bench seats with only lap seat belts? In the event of an accident, you had your choice of a concussion as you jack-knifed forward into the dash, or a broken neck as it got snapped on a rear end impact with no head restraint on the seat. I wanted not only a safer seat in my 1962 Pontiac but also one just like a Cadillac that is comfortable and offers lots of adjustments for my wretched back. The aftermarket sells no such seats.
A visit with Mark to the Colorado Springs Pull and Pay junk yard yielded a nice pair of Buick Riviera seats with maroon leather upholstery. They are nice, but I thought I might be able to do better, so I gave them to a buddy for his old Dodge. A second trip yielded a couple of brown 2000 Cadillac seats in a lovely leather. I bought them even though they had no over-the-shoulder belts. My friend Dusty got a hot lead on a 2001 Cadillac Deville in the Denver yard that had the over-the-shoulder belts as part of the seat structure along with motor driven head rests. This is just what I was looking for! All I need to do now is apply some elbow grease and saddle soap to clean them up, put the plastic clad back on, and they should be not only very comfortable, but also look great. While we were at the Denver yard, we also took the rear seats from the 2001 Cadillac Deville, which will fit nicely in my Pontiac. 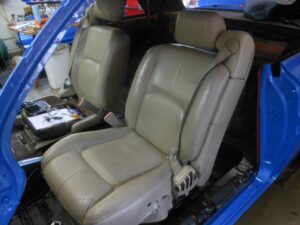 Now comes the challenge: You cannot just punch some holes in the floor and mount these seats as they would probably fail on impact. Instead Dusty cut up rectangular steel tubing, shaped it to fit the floor and seat, welded them to the floor, and then installed half inch grade eight bolts in a manner that is similar, but even stronger, than what the factory did. You can’t see the tubing, and they are very professionally done. It is what you can’t see in a car that is part of the “last five percent.”
(FOR SALE: Two brown leather 2000 Cadillac seats in good operating condition.)
I wonder – do I now have the world’s first Pontillac? I think … YES!
Stay tuned for more next month.