It has been a busy month, so I thought I would give the gearheads among you a quick update on my progress with the restomod of the 1962 Pontiac Catalina. As a refresher, a “restomod” is where you take an old car and install new mechanicals. For my Pontiac, the donor was stripped totally bare and media blasted. The car is being rebuilt with all new components, which includes a 430 hp Chevrolet Performance LS3 engine with six speed automatic, power disk brakes, power steering, A/C, rebuilt suspension and state of the art audio and navigation. It will effectively be a new modern car in an old body when completed. Check out my May blog to see the beginning of the restomod. So here is the current status, and why I have a large rewards account balance on my credit card.
Trunk Floor Fabrication
The frame of the car was very sound and rust free except for the trunk, which had a bad seal that was allowed to turn into Swiss cheese. I ordered replacement panels which I was told were being shipped via a slow boat from China due to land on a Tuesday. Dusty Price said, “I can make that, and besides we need it modified to have access to the in-tank fuel pump.” A couple of sheets of 4 by 5 steel plate and a whole lot of cutting and welding resulted in this:

It is a great job and very strong while providing access to the new fuel tank and in-tank Holly fuel pump.
Chrome Plating
I buckled up for another trip to Brush, Colorado to meet the Smitty’s Chrome Plating truck coming from Oshkosh, Kansas with $2400 of rechromed bumpers and tail light castings. It is a big expense, but the chrome is excellent quality with all imperfections removed. (In the future, you may wonder why I shot the guy who said that the minor dent and scratches he put in it were not a problem. . .) 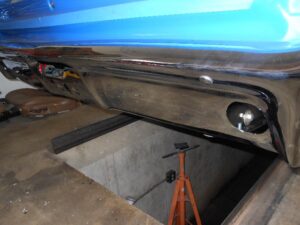 Wheels, Brakes and Tires
The Master Power disk brakes and power booster are installed, but they require final hydraulic line fab. After some misadventure, I was able to get a new set of 16 x 8 steel wheels and fitted them with Michelin radial tires. 15 X 8 wheels are an industry standard with a huge supply in several styles; however, the 16 X 8 wheels supply and style are very limited, but that is what I needed to ensure good clearance for the disk calipers. I had something occur that is rare: one wheel and tire were perfectly balanced with no weights required. The other wheels only needed minimal weights, which is why I sing the praises of Michelin tires.
Air Conditioning
The Pontiac was not originally air conditioned; if it originally had A/C, it would have used the old GM monster compressor requiring the old refrigerant, which is no longer available. I bought the latest Vintage Air Gen IV System, which uses electronic controls like a modern car rather than the old style vacuum diaphragms. I thought it should take one weekend to install it and still leave time for a barbeque and beer. Three weeks later, Jonathan and I managed to get it installed.
What took this install so long?

The combination of calculating not only install time but also fabrication time indicated a need for tranquillizers, not a barbeque. But as the saying goes, “If it was easy, anyone could it.”
Here is a picture of the firewall as fabricated, and one of the outlets where the ash trays were modified to take the A/C outlets. 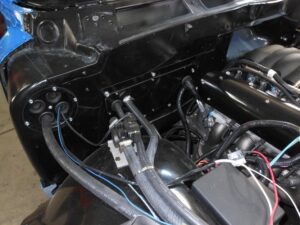 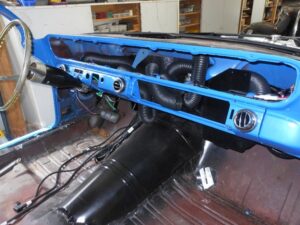 I think this next modification is clever. I took the bezel off the old radio and machined it to take the A/C control panel. Such a simple looking job, and it only took two days to do it. 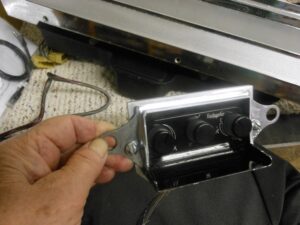 Confusion
I could not figure out why there was an emblem on the hood, and the holes for another emblem on the grill. Dusty pointed out the hood was still at the body shop, and I was looking at the trunk lid. 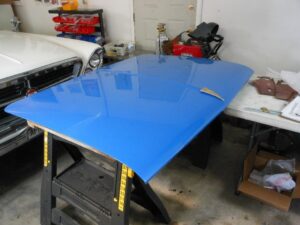 Now tell the truth – Doesn’t that trunk lid look like a hood?
Going High Tech with a Console
I bought the new Kenwood distracted driving system to put in the console that we will fabricate. It has a navigation system, Bluetooth, WiFi, iPhone connection, front and rear cams. It is guaranteed to help you keep your eyes off the road and your ears overloaded. Oops, I did not know that the fire engine was coming!

On the Trailer
The restomod is on its way to the muffler shop to pick up some sweet duals. I know it may not look like it, but this project is farther along than it looks. We will leave the fenders and doors off until the end to make internal wiring access easier. 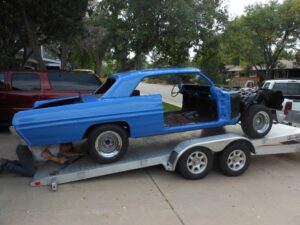 You are now up-to-date, and I bet as caught up in the excitement of this restomod as I am! It should be running soon and ready for the interior. A massive amount of wiring is still required. Stay tuned!
On the literary front, there is another project in the works. More on that in the very near future.