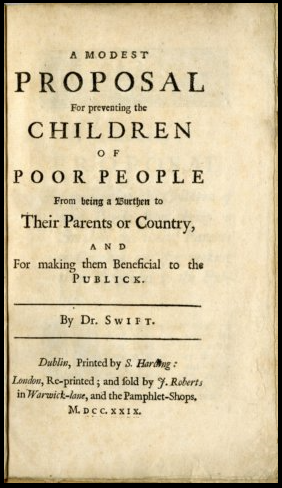 If you did not fall asleep in your English lit class or cut class to go for a ride in your hot rod, you may have come across this writing of Jonathan Swift and his book, A Modest Proposal. To save you the effort of looking it up, I will show you the Wikipedia synopsis of the basic premise.
A Modest Proposal, is a Juvenalian satirical essay written and published anonymously by Jonathan Swift in 1729. The essay suggests that the impoverished Irish might ease their economic troubles by selling their children as food for rich gentlemen and ladies. This satirical hyperbole mocked heartless attitudes towards the poor, as well as British policy toward the Irish in general.

In English writing, the phrase “a modest proposal” is now conventionally an allusion to this style of straight-faced satire.
While I make no claim to be a writer of stature, I do feel compelled to present modest proposals of my own, which I feel are appropriate for the time in which we all live. In fact, I will be bold enough to present three such proposals for your comment and critique. Perhaps you have a proposal of your own that will be of immeasurable benefit to society. So with humble apology for my limited talent, I shall proceed with presenting my own modest proposals which, as you will discern, have a common thread.
PROPOSAL NUMBER ONE – DEMOCRACY AND ELECTIONS
We all know what is coming: the unending blizzard of candidate attack ads, the political phone calls during dinner, and the multitude of messages stacking up in the mailbox. There will be huge amounts of money spent on consultants, polls and PAC self-serving informational propaganda by sources who cloak their identity in silly semi-patriotic names such as “The Institute For Social Justice,” The Hon. Justice C. Buford, Chairman (my bad). The driving engine behind it all is, quite simply, money. Money basically buys the influence that controls the voters, and thus determines the outcome. So why not bring it out of the shadows and make it the prime mover?

Let’s set up a national version of the United Fund, a nonprofit agency, to act as depository and adjudicator of presidential and congressional elections. The candidate receiving the most funds contributed to the UNF (United National Fund) in his/her name wins the election. Think of all the remarkable benefits, such as several billion dollars funneled into direct social benefit rather than disappearing into the TV and USPS ether. No money will be wasted on annoying advertising and fund raising. The thrill generated on election eve as breathless TV talking heads report the huge amounts of money coming in at the last minute – kind of like an eBay auction.
“ALERT: With ten seconds to go, NBC reports that ten million dollars was just wire transferred into the candidate’s account. This one is a real cliffhanger, folks!”
Now all the high-priced political operatives can concentrate on lobbying the UNF on getting their favorite charity funded. Citizens can now “vote” with their smart phone saving the effort of going to a polling place or mailing an envelope. Lobbyists would retain some, but not all, of their clout. 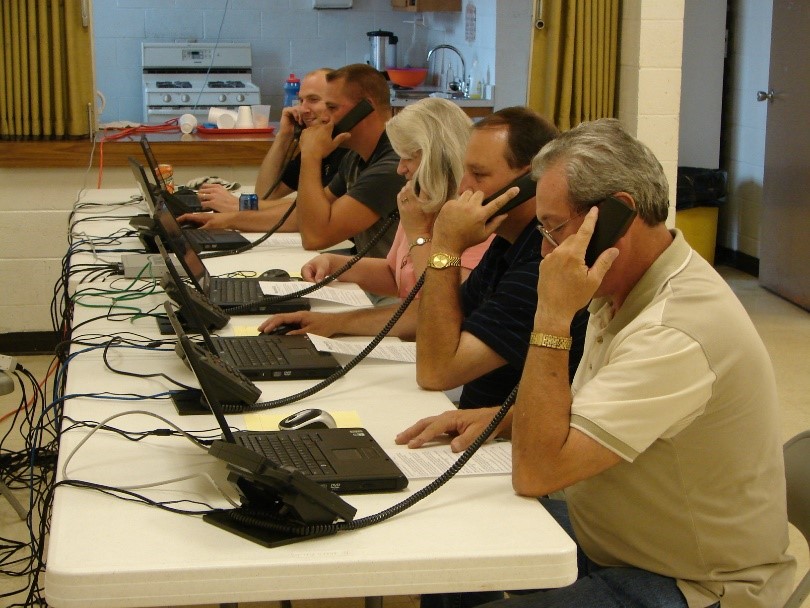 The UNF would be under government mandate to spend at least 90% of the proceeds on social projects. If the Russians want to influence our elections, it would cost them direct dollars of foreign exchange and a trail of their participation. It would be up to voters to overwhelm them, or perhaps use election rules to nullify their contribution (but keep the money). I am sure many more benefits come to mind . . .
PROPOSAL NUMBER TWO – PROFESSIONAL SPORTS
I heard on the news that draft days for major sports are extremely popular entertainment events with the adoring public observing in person or massively following on TV and social media. The basic purpose of the draft is to buy talent for the team that will insure a winning season. The teams that buy the best talent can win the most games and with it a national championship.
The result is that players that can throw, catch, hit a simple moving object or prevent others from doing the same become the richest members of society. The team owners achieve great wealth from ticket sales and indirectly advertising revenue from sports broadcasting. A semi-legal underground of gamblers wager large amounts of money on the games, and municipalities devote several resources to support the sports franchise. The public is left with ridiculously high ticket prices to pay to see the contest and also bear the burden of taxation for franchise support.
So the question arises: What can be done to check this huge financial spiral, and how can some social good result? I think there is a very clever and basic solution. Since the outcome of the contests is largely determined by money, why not have the winners established by auction on draft day for each of the major sports? No need to bid on players as they are not part of the equation. They can finish their education, then play the game for personal satisfaction. Each franchise would bid on the winning outcome on a game-by-game basis. The franchise with the most winning bids is then declared the national champion.

Illegal sports betting would be hampered because the winner of every game will have been determined in advance. As an alternative, perhaps they can bet on the number of hot dogs purchased in the section behind home plate? Ticket prices would drop because the only reason for watching the game is to observe the skill of the players, but not to root for a winner. The players would not have to compete to the extent of enduring personal injury, and many of them could still have day jobs. TV coverage would stop their interference in the play of the game to create times for commercials as the demand for them would drop.
Perhaps the competitive environment could be shifted to winning a science fair competition by rewarding the winners with substantial wealth. We might get the cure for cancer that way.
PROPOSAL NUMBER THREE – THE MILITARY
I am confident that, up to this point, you are in agreement with my proposals. This next proposal, however, may be a little controversial. Its objective is to convert war from holocaust to social good. This is more easily done that you might initially think. You have to ask: Why do we go to war? It is for economic, territorial and subjugation reasons. This comes at a disastrous cost to society and to humanity in general. What is needed is a way to obtain these goals without the devastation. It can be done.
If we just look at the economics of the military and view them in a very personal light, you gain a better perspective on the cost to society. One burst of 20mm ammunition will absorb the entire tax revenue of most individuals. A B2 bomber nonstop flight from Kansas to the Middle East will consume the entire tax collection of a small town. And it goes on and on. It all essentially goes to waste. It is either destroyed in combat or turned into scrap as very little of it has civilian use. I think the magnificent B-47 bombers and KC-97 refueling tankers that I worked on when I served are now functioning as pots and pans.
Let’s go to “war” with money in an auction. Set up the WWF (World Wide Fund) to auction off wars. If Russia wants Venezuela, it places a bid to “conquer” the country. The USA can counter their bid with a higher bid if it chooses to do so. The highest bidder wins the war and pays the WWF the amount of the bid, which by rule 90% must be spent in the conquered country. The “conqueror” can recoup its money by taking profit from the country. The citizens experience an economic boom; in time, they get their country back because it is a fact that all conquered countries revert back to their original state as the conqueror gets tired of the burden it has assumed and simply leaves. Russia in Cuba, U.S. in Vietnam, France in Morocco, etc.

The taxpayers get a return on their tax money in the form of profit from the “war.” No lives are lost, and everyone benefits. See how easy it is!!
CONCLUSION
There you have my three modest proposals. I am just the provocateur providing the stimulus, but not the sound planning for implementation. I leave that aspect to others more suited to the task. Such an odd thing to think that the wealth of human society could be used for beneficial purposes while fulfilling our basic animal need for competition. Why does this sound so foolish and clearly not possible? The answer lies in our biology. The primitive brain overrides our cerebral cortex, thus electrically and chemically dooming us to some of our irrational activity that we call “Mother Nature.” She may be a lady, but beneath the façade, she can be one bad bitch. I don’t really know how to control her, but it is important that we try. My proposals are a start.