Spring has sprung
that grass has riz
where last year’s
careless driver is.
– Burma Shave

That is my old age test for you. If you remember Burma Shave signs then you are officially declared to be old. For you millennial whippersnappers Burma Shave was a shaving cream that you lathered on your face to help you shave with a straight razor or one of those newfangled Gillette razors that used disposable blades that fit into a handle. To advertise the product, they posted signs with catchy rhymes on almost every road in the country. The signs were paced about 20 or more yards apart so you had to read them all to get the message. It was kinda fun to read them even if my shaving requirement as a seventh grader was nonexistent. If you are into it, search online for “Burma Shave signs” and see the rest. 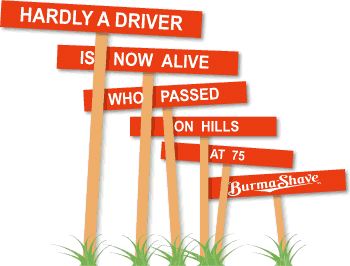 What the Burma Shave signposts really represent is the joy of the open road, an experience I’ve enjoyed so much in my life that I hope it doesn’t fade as a classic American pastime. Big highways, small country roads, greasy spoon diners, small town inns and motels, rambling solitude, great conversations, singing along with the radio, listening to a great audio book, studying the map, stopping along the way to visit friends . . . the list seems almost endless as to what delights you can experience.
My wife and I drove coast to coast and border to border twice in one year when I started my medical instrumentation company. You may remember the Chevy Beauville van that was popular back in the late seventies. When you have large equipment and a limited budget, it is very cost effective to drive between cities. No baggage handling, no car rentals and no fixed schedule. You get up in the morning, have an Egg McMuffin, and hit the road. We got so good at it that fifteen minutes after arrival at a hospital, I could be ready to record a patient. A strenuous but actually very enjoyable time for us as we clicked off ten thousand miles of interstate travel.
In order to enjoy these road adventures, what you need first and foremost is a good car. Of course, the definition of “good” keeps changing. Some say the old ways are best. In fact, as a response to my March newsletter I received an excellent reply from one of my Chrysler 300 friends. No, not the new Chrysler 300, but the original one that was such a dominant muscle machine in the middle 50s to early 60s. Most authorities would credit it with being the first true muscle car. The ones with the real dual four barrel carb hemi engine and later the ultra powerful 440 with the cross ram manifold. I have owned both, and my next book will feature the original 1955 Chrysler C300. It is all written in my head – it just has to be put down on paper, which is an inconvenience since you probably cannot (and indeed may not care to) read my mind.
I liked what Richard Barber of Brentwood, California wrote so much I asked him if I could reprint it in my May newsletter as I think my readers would appreciate and relate to what he has to say. So here goes:

I must admit to major disappointment in many subject areas with the younger generation, especially here in California. They don’t seem to “get” the exhilaration of or appreciation for driving or owning an interesting car, let alone an interesting old one. In some way, it may be since tinkering and tweaking of any part of a newer car’s propulsion system is expressly verboten to the owner. The owners and their sick cars must go to a dealer or to a high-tech & expensive shop—all in the exalted name of the environment. One can no longer get the sense of achievement of tuning a carburetor and choke system with all those little screws. So, instead of spending time in the garage getting dirty and smart, one can stay in air-conditioned comfort on mom’s couch and Google all the information in the world. Kids out here may not even get a driver’s license and rely on bikes, driverless cars, Uber drivers, public transportation, BART & etc. Good luck on enjoying the vistas of the USA from a tour bus or from an Amtrak car speeding through the night.
From an auto maker’s perspective, they are all in favor of loading up the cost of vehicles with safety and environmental equipment so long as the other fellows are doing it. This maintains a level, and much higher, playing field. And this can only be accomplished with Federal regulations. It seems these were and are very complicit attempts to make work for auto workers in Detroit and more profit for the big three—but it failed. Only Ford really survived the global competition of Japanese, Korean, Mexican and Chinese workers that are willing to do the same work for a fraction of the cost. As you are astutely aware, however, the push for cleaner exhaust led to more efficient engines. If one burns all the fuel, one will get better mileage. Duhh! Very nice side effects include better drivability on the way up to the summit of Pike’s Peak. However, the MAP sensor on our 2005 Durango failed twice on different trips to Trail Ridge Road. Maybe I over-ranged the sensor at high altitude??? They don’t have high altitude in China?? Like Mt. Everest???
But, we should not rant against change. In the old days, we might have shouted “Get a horse” at some poor bastard, stranded beside the road–scratching his head with the hood up on his Model T. I have read and believe that one should never try to get a pig to sing. It just can’t be done plus it irritates the pig.
Finally, we see that there is a plethora of old car groups—trying to keep the old values and iron alive. Interest moves with the times—from Ardun heads to Hemi-Cuda’s to hyper-tuned rice burners with #10 peach can muffler-stacks. The fascination, pleasures and rewards of driving, sharing values and experiences and overall good stewardship of a vintage car remain for many men and women of all ages—but the interest tends to focus on what we (and our parents) were driving when we were in our formative years. I was lucky enough to be a teen in the 50’s and work in a full service gas station.
Carry on.
Rich and Ruthanne

Well said Rich. By the way, Mount Everest is in both Nepal and China. I prefer the Nepal side for my next climb. As a longtime member of the Early Ford V8 club, I see as our most pressing problem the need to get the youth of today involved in preserving and enjoying these historic machines. A ray of sunshine is the growing interest in “Gentlemen Racers” who drag race and hill climb (in a gentlemanly way) the old hot rods with the flathead V8 engine. It is attracting some of the younger crowd, who will hopefully get infected with the restoration and hotrod bug.
Here in Denver we remember the “Brown Cloud” when automotive pollution got trapped under the cold upper layer and turned the air brown and dangerous to breathe. Ironically the worst condition was at the corner of Colfax and Colorado Blvd, which is the location of the world famous respiratory research hospital, the National Jewish Hospital. I think we all must applaud the creation of efficient fuel injection engines and the greatly diminished pollution that has resulted. Thirteen to fifteen miles per gallon was the norm in the forties and fifties. No one would buy a car like that now unless it is a Ferrari, which is OK because there is no place you can drive it anyway.
My new book will feature not only the 1955 Chrysler C300 but also a fascinating protagonist who has as much muscle as the car he drives. What would you do if you were asked by your government to sacrifice all you hold dear to prevent an unspeakable tragedy? Could you voluntarily lower yourself into the depths of criminal society? You will meet Brad Sutherland. He is not loveable, just effective. You may not like him, but you damn well better respect him. Can he make it from LA to Ithaca NY driving a 75 year old Chrysler in less than 36 hours? He damn well better, or there will be hell to pay. 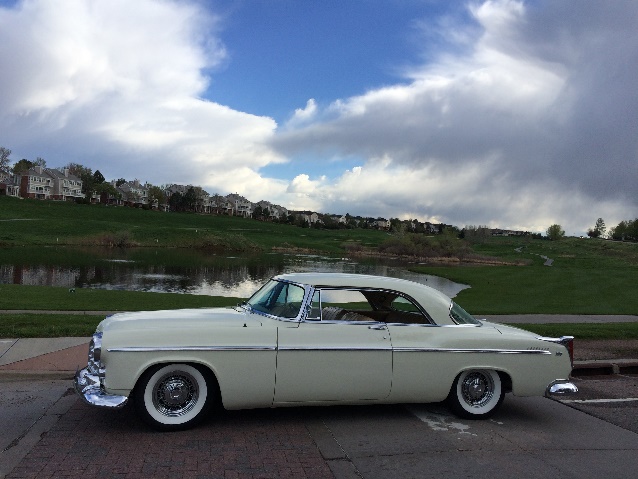 Speaking of May Day! I am reminded of my military days and the expression “Mayday! Mayday!” Brad will need to use this since the story will be full of high-tension moments any one of which could spell disaster.
Well, if I don’t get back to writing, you’ll never get to read the new novel, so I’m heading back to my desk. As always, enjoy the open road and stay safe!
Charles