It is a beautiful fall day with a clear sky and no wind. In less than an hour, the Group B cars will be called to the grid for the final race of the season. With only 20 points separating him from Heinz and his Porsche Carrera, it was surely going to be a close race. Now that he had the new Duntov cam shaft in his 1967 Corvette Roadster, he might have the necessary power to beat Heinz if he could only drive his very best race. Heinz’s arrogant attitude toward him and his Corvette really was eating into him. He felt deep down the need to conquer Heinz, win the race and the title. 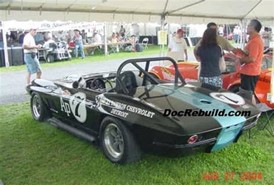 The fifteen minute warning meant it was time to put on his helmet, strap into the car, and pull up to the grid in his number six starting position. The qualification run was not a huge success as the tire pressures were a little off, which kept his cornering speed down. The engine fires right up and then settles into a fast idle of 1500 rpm. The camshaft and timing make a smooth idle impossible in the race-tuned 327 engine. With 110 octane Blue Sunoco in the tank that made a 12 to 1 compression ratio possible and 16 degrees initial timing advance, this Corvette was no grocery getter but an all-out race-tuned machine.

Pulling onto the grid behind him was Heinz in the Porsche who passed him on the way to his number one grid spot. The lightweight aluminum body, no thicker than a double layer of Reynolds Wrap, and the roller bearing crankshaft and quad overhead valve cam shafts made the four cylinder engine car a giant killer of the heavier high horse power Corvette. As Heinz passed him, he looked over and gave him the finger as he pointed casually to his helmet. So much for gentlemanly racing. This was going to be combat.
With a wave of the green flag from the starting stand, the cars pulled out in order for the pace lap. This would be five tenths driving at slow speed to allow the engines and tires to warm up. He would sprint the Corvette up into second gear for a second and then jam on the brakes to warm up the brake pads. As the final turn approached before the start/finish line, the pace started to pick up, and he morphed into an eight tenths driving mode. Still relaxed but ready to spring into action, he shifted into third gear ready for a fast start acceleration.
With a wave of the checked flag from the starter, the whole field erupted with a huge roar. His racing experience immediately put him in a nine tenths mode as he fully engaged the stiff McLeod racing clutch, jammed his foot to the floor and took off down the starting stretch in the middle of a pack of snarling machines. The first turn would be high hazard as he knew some foolish driver would try a dangerous pass as they braked into the first turn. He had to keep his cool and stay out of trouble. You win the race on the last lap, not the first lap.
As the race settled down and the cars found their order in the field, he shifted into a ten tenths driving mode where he smoothly entered and exited the corners using perfect trail braking by executing a smooth heel and toeing of the accelerator and brake in a manner that took a few years to perfect. By picking the perfect racing line that suited the heavy but powerful Corvette, he deftly worked his way through the field. With the final lap coming up, he was on Heinz’s tail.
Heinz may be arrogant, but he backs up the arrogance with very skillful driving. He had the racing line covered with no chance for the Corvette to pass. As a final token of disrespect, he gave him the finger as they passed the start/finish line on the final lap. A sudden surge of anger filled him when he saw that. He decided NO WAY was Heinz going to win the race. As they approached the corkscrew, he saw the marker that he used for braking to successfully make the off camber downhill turn that could be totally treacherous. Without even thinking, he kept his gas pedal foot slammed to the floorboard and shot past the surprised Heinz, who immediately started an evasive braking action to avoid the certain wreck that was going to happen.

From that point on, he had no idea what happened. The film showed that he went airborne at the corkscrew entrance but somehow managed to land on the berm at the edge of the track that threw the front end of the Corvette back onto the track. From there, it fishtailed through an oil slick that left two earlier cars spun out into the gravel. Somehow he maneuvered the Corvette straight again and still full on the gas at 6500 rpm, he sprinted to the final left hand turn and the checkered flag. He did not fully regain his senses until he braked for the start line turn.
To this day he does not know what he did to keep the Corvette from leaving the track at full speed and probably killing him. It was an 11 tenths driving experience.