A Rare Treasure Among Classic Cars 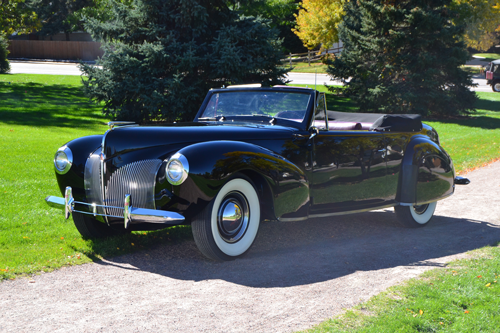 This is the original Lincoln Continental, and one of only 300 convertibles that were built.
The design was commissioned by Edsel Ford in 1939, and the prototype attracted so much attention that limited production was implemented. It is recognized as one of the most beautiful car designs ever and features the original “Continental” Spare tire, which was to become very popular on other car models.
Much of the car is handcrafted because of the limited production. The engine is the 120HP flathead V12 with aluminum heads. The original pistons were lightweight steel and lasted forever. The transmission is a standard three-speed Ford manual connected to a two-speed vacuum shifted Columbia rear-end. The interior is full leather complimented by gold plating on all the dash and door trim.
Driving the car is a trip back in time. It is very smooth and deceptively fast due to the torque of the V12 engine. The seats are stuffed with what is now very rare cotton padding, which give them a special feel. With the top up and rear window zipped, visibility to the rear is minimal. With the top down on a warm evening, you will have the ride of your life. There is nothing better.
This car was restored by the owner; the restoration involved 29 different craftsmen and helpers and 29 specialty suppliers.
Awards:
1st Place Concourse – 2013 Lake Tahoe Golden Jubilee
Early Ford V8 Club
Best Primary Division – 2016 Lincoln Continental Western National Meet
Lincoln Continental Owners Club
It is now available for sale.
Owner: Charles S. Clark
303-795-6900
flatheadeng@comcast.net