Let’s leave women out of this and chat about something that we know about and can understand. In this case, that means vehicles that we have owned, driven and perhaps for some of you — stolen. While cars are inanimate objects, they nevertheless have personalities. Some are real bitches that defy your desire to travel in them. They fail to start or have vapor lock in the summer and manage to find fenders to dent. Others are a family friend that faithfully transport you and your loved ones without incident to wherever you need or want to go. They just need a little care and feeding to run problem free for their entire residence with you. Then there is that one special car that is the “sweetheart.” It became a part of your life: you had some adventures in it and have many memories of driving it.

Let me share some of my “sweethearts” with you. We can start with my 1940 Ford hot rod that was my first car. I bought it in 1955 just after graduation from college and reporting for duty as a shave tail 2nd Lt in the Air Force. It was fun and became a lesson in backyard mechanics. It was followed by the 1950 Oldsmobile (more about that later). When I was out of the Air Force and going to Cornell, I bought a 1954 Buick Special. That car allowed me to pick up a cute little Asian woman who became my wife. When I blew a piston on the Buick, it was time for a VW Beetle. It was reliable, economical and got us to our new home and my first engineering job in Alamogordo, New Mexico.

Next, there was the Volvo station wagon, two more Oldsmobiles, a couple of pickup trucks and the faithful Chevy Beauville van that took us coast-to-coast and border-to-border twice in one year at the start of my business. When we moved to Denver, we had the startup business and the lease cars: Infinity (three times), Lexus and a BMW 540. These were good cars, but the BMW had a problem; it was too fast with the V8 engine. One hundred mph was the sweet spot, but U.S. interstates can only be traveled at 80 mph, and even then, you have to be a little lucky. The BMW was my first navigation system car, and this “sweetheart’s” name was “Helga The Bitch,” if that gives any inkling as to her personality. More than once, she tried to turn me into a median barrier. We will skip the collector cars for now as that is a different class of vehicle and a different story for a later date.

For me, my number one “sweetheart” has to be the 1950 Oldsmobile Holiday hard top that I bought in Denver in 1956 from Weaver-Beaty Oldsmobile. It was a used car but in good condition. It had style and, most importantly, the “Rocket V8” engine. At the time, a 135 HP engine with overhead valves was a powerful offering for a public used to 85 HP flathead Fords. The dealer offered me a very generous trade in allowance of $50 for the 1948 Pontiac that 2nd LT Billy Hagen and I had paid $75 for a year earlier. 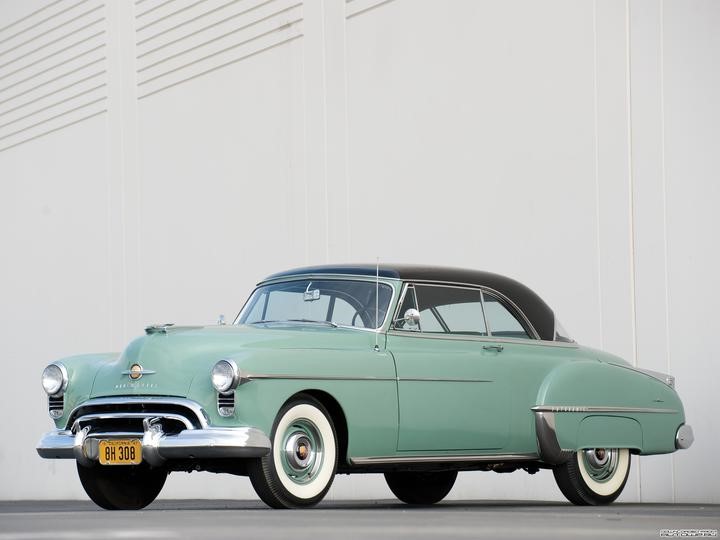 Needless to say, the 1950 Oldsmobile Holiday was my first really good car, and I loved it. It would pull the mountains and canyons going to Central City long before the casino invasion. Any guy driving that road stood on the gas going through the tunnels just to hear the pipes roar. The Rocket V8 engine made some nice noise. It would cruise Colfax Avenue at midnight as well as racing flathead Fords on US 40 where it turned into a near vacant highway just past Fitzimmons Army Hospital. It was with just such a race that I used up one of my lives one dusky evening shortly after I got the car. I passed the other driver at 60. He passed me at 75. I was passing him at 90 when another car came at us from out of a “whoop dee do” in the undulating state highway. The Ford took the right shoulder, the oncoming car took the left shoulder, and I took the middle. Lesson learned, no more rat races on the open road.

Some cars you never get tired looking at. The Oldsmobile was like that. It was the start of the breed of hardtop coupes that became quite popular. I drove it nonstop from Denver to my first USAF post at Dyess AFB in Abilene, Texas. Dyess was a newly commissioned SAC base (Strategic Air Command), which was destined to become loaded with 90 B47 jet bombers, refueling tankers and big transports. However, as an armament systems flight line maintenance officer, I got there before some of the roads had been established and before any aircraft. To keep me occupied, I was made an adjutant in the Air Police. This gave me the pleasure of using the Oldsmobile to chase locals off the 14,000 ft runway, which had yet to be fenced in and was used for impromptu drag races. That pleasure evaporated along with any free time as the cold war intensified and the maintenance intensive B47s arrived.

The last Christmas there I was able to wrangle a leave to go to Binghamton, NY. I had a BOQ buddy that needed to go to Altoona, PA. We had no money and no schedule for air travel; it was too expensive. So we filled the tank with gas and drove nonstop from Abilene to Altoona. I dropped of my buddy, and I went on to Binghamton. The Oldsmobile ended up with an impressive collection of hamburger wrappers and coffee cups, but it only required that spark plugs be replaced and new points installed after the trip. There was no fuel injection and electronic ignition in this car, but it had a very reliable engine, and you could do your own maintenance.

Texas roads in the 1950s were well maintained and essentially wide open. I was in a hurry getting back from Waco after a date I had with a Baylor coed. At one point, an approaching sign said “Abilene – 50 Miles.” I was there in 30 minutes – go figure! There were only 135 horses under the hood, but they were really strong horses.

The last trip in my favorite “sweetheart” car was a coast-to-coast jaunt from Binghamton to San Francisco. This drive included five days of fast driving with no problems. I had orders to go to Japan, and despite my best efforts, the Olds would not fit in my duffel bag. I sold it to a transport pilot at Fairchild AFB in California. As I walked away from the parked car, I could see a puddle of transmission fluid on the ground. A rear seal had given up the ghost, or perhaps it was my “sweetheart” slashing her seals at the thought of losing me. I wish I still had her.

Tell me about your “sweetheart” stories, and you can read more of mine in my book, The Bootlegger 40 Ford.