I have been retired from business for a great many years now, but when I was employed as an Application Engineer and subsequently Product Manager of Computerized Cardiac Cath Lab Startup and Production for the Honeywell Test Instruments Division in Littleton, I felt I needed a title.

After all, I was dealing with high ranking hospital staff, including cardiologists, who all had impressive titles. I wanted to be seen as more than a donut-providing salesman, so I felt I needed a proper apellation. To that end, I took the professional engineering exam so I could get the P.E. title to add to any official correspondence. The knowledge and experience I possess more than qualified me for my position;  the real need for P.E. qualifications was actually not germane to the job. It was just a ploy to elevate my status.

Due to my age and no longer being a part of the workforce, I let my P.E. license fade into inactive status. It had served its purpose and was no longer deserving of active consideration. However, a circumstance arose in my neighborhood that I felt needed the attention of a seasoned professional engineer. The young family next door leads an exhausting modern lifestyle that keeps them constantly involved in various interesting projects. Joe, the dad, is very clever and inventive with considerable design and construction skills. He enthusiastically lets his young son and daughter enter a race contest for cardboard boats. I was invited to inspect the unique vessel he was building for them. Upon observing their boat and listening to Joe’s concern about its ability to float, I felt compelled to offer pro-bono engineering assistance. What follows is a copy of my engineering analysis.

(this document is unclassified)

The Joe S. design is a novel implementation of the DTS (Designed To Sink) class of marine vessels. What makes it unique? Unlike a submarine, which is a binary DTS that is not only Designed To Sink but also Designed To Surface, the Stricker design does not have binary capability.  In other words, once it has sunk, it will remain sunk. Quite a novel concept that presents many challenges.

The design, as executed, is a tri-hull catamaran powered by juvenile family members using self-destructing paddles. It is felt that the tri-hull design will offer extra stability and serve as a stable platform for the paddlers. It is anticipated that the vessels will remain afloat for a limited duration in order to complete a short course competition under controlled contest specification.

To meet specification, the vessel is constructed out of closed cell cardboard with paint being the only form of permitted waterproofing. It is anticipated that the vessel will sink after exposure to water, but the duration of the flotation is unknown since testing would be destructive. It is assumed that adequate safety provisions will be made to recover the paddlers in the event that sinking should occur prior to finishing the competition.

The owner of Flathead Engineering, who is a retired professional engineer licensed in the state of Colorado, has been retained without compensation to evaluate the flotation capability of the construction despite the fact that he has no qualifications for this type of flotation vessel.

The following as built measurements have been provided and certified by Mr. S., who is the owner, designer and fabricator of the vessel. These will be used to calculate the buoyancy of the completed vessel with a paddler crew on board.

AS BUILT MEASUREMENTS:
Total surface area of the tri-hull: 20.6 ft sq.
Loaded vessel weight with crew on board: 185 pounds

At 70 degrees Fahrenheit, one cubic foot of water weighs approximately 62.30 pounds. Keep in mind, however, that the density of water, and thus its weight by volume, fluctuates based on its temperature. Because of the rather informal nature of the construction, an approximation of 62 pounds per cubic foot will be used.

The loaded vessel will sink 1.8 inches into the water prior to absorbing water, which will overcome its buoyancy and cause it to permanently sink beyond economic recovery. It is recommended that a waterline be scribed on the hull at two inches above the bottom of the outer pontoons.

Insurance: This vessel, due to its intended purpose, is not eligible for maritime insurance as total loss is assured.

Respectfully submitted:
Charles S. Clark, P.E. ret.
Note: This analysis is worth exactly what you paid for it. 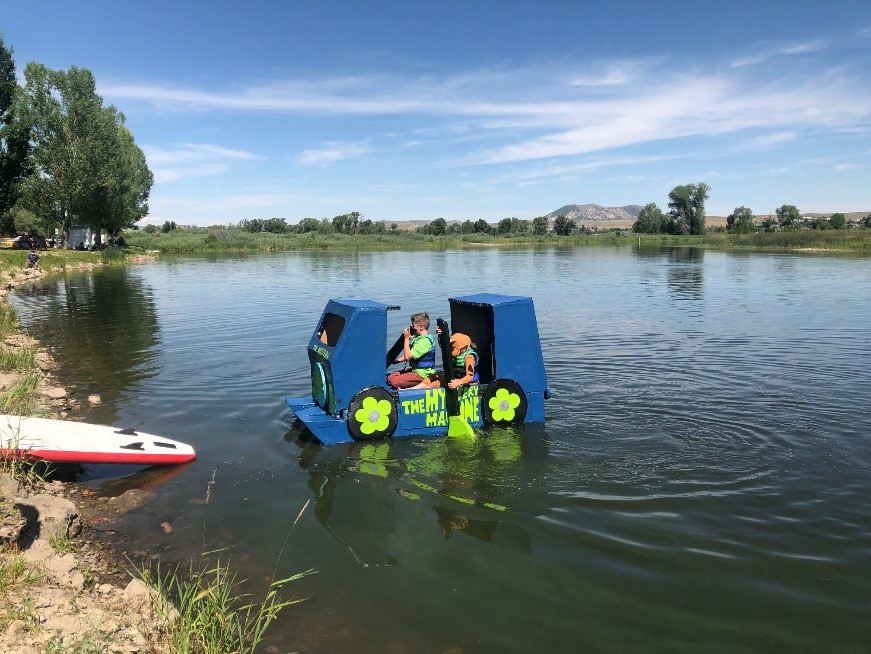 The competition went on as scheduled under fair weather conditions, a light breeze and calm water. Upon launch, the tri-hull catamaran sank to the flotation level exactly as calculated in the engineering analysis. The crew performed admirably, but the design suffered a flaw that relegated them to second place. It seems that the paddle handles did not have adequate bending strength to retain integrity for the entire contest. This put the crew at a disadvantage as full velocity could not be sustained resulting in a degraded lap time.

Another design weakness was the failure of the vessel to sink. The closed cell cardboard used in its construction did not lend itself to rapid deterioration. In consultation with Joe S. and the competition crew, it was decided that the lessons learned in this race could be applied to the race next year resulting in a faster vessel with an improved chance of winning and sinking as scheduled. To this end, Flathead Engineering has offered to work with the male crew member as an EIT. (Engineer In Training). It is essential that the EIT expand his current elementary school math capability to the next level.

The design work will focus on improving parasitic drag factor of the hull plus a sturdier and more efficient means of powering the vessel. With these improvements, along with the enthusiasm of the team, it is within the realm of possibility to win the race. I will report on progress as soon as there is any.